When I visited Fred Mogubgub Jr. in his high rise apartment by the airport during the summer of 2002 he had his father's paintings stashed everywhere.

They were behind the refrigerator, in every closet, under the drop ceiling. 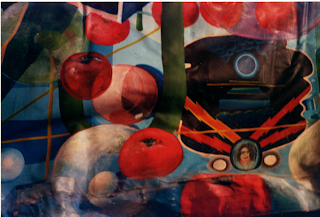 The New York Times claimed it amongst the world's largest paintings.  Mogubgub claimed it as the biggest.

Fred Jr. had it dissected and rolled up in scattered corners.  More, he said, was in storage in New Jersey.

In addition to tomatoes and zucchinis, there are portraits of the artist's children, tarot inspired symbology and other cosmic iconography. 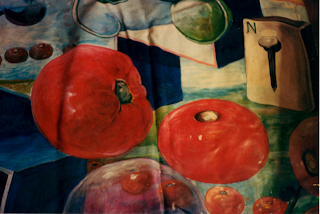 I only manage to snap a few images on my Pentax K-1000.  They hint at what a complex layering the painting must have been.

Email ThisBlogThis!Share to TwitterShare to FacebookShare to Pinterest
Labels: mogubgub

In the fashion of Benjamin Gates, I've decided to spend my free-time hunting down any and all lost Mogubgub paintings.

It's wonderful to see even these small pieces of "Virgina's Garden". I knew and visited Fred in NYC in '68, '76 and '89. He was brilliant and very intuitive. I saw the original in one piece; it's too bad no one photographed it. Thanks for the history background re: WTC.

Hi Mary, I wish I had more photos but these were taken back in 2002 -before the time of digital cameras.

I was stuck with just 2 or 3 rolls of film and half of the shots didn't turn out at all.

I'd love to hear more of you thoughts and experiences with Fred, and to hear if you had any art of his you'd like to share.

I worked with Fred Mogubgub, B. Goode, Hart Perry & Kevin Cahill out of a loft on Canal Street & West B'way in NYC and watched him paint Virginia's Garden. I may even have some pics of him painting it. jonbarone@yahoo.com