I can't express how fortunate I am to know her and have worked with her.

I can't express how much better she has made the world.  Happy Birthday, Tissa!  Many more! 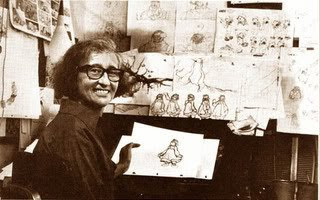 Like most people I didn't catch a second of Mike Judge's "The Goode Family" when it aired this fall on ABC. Likewise, I suspect many of those people who missed it would agree that Mike Judge is a singular writer and father of characters.

Comedy Central has picked up the show for syndication. Business-wise its a sensible move, see how the reruns rate and pick up a second season at a cut price if its successful. Coming off "King of the Hill", an original Mike Judge development could command a substantially higher producer fee than a second run program would.

The show has been compared negatively to its predecessor, and rightfully so. "King of the Hill" began on a similar note -knowingly mocking Hank Hill and the residents of Arlen -before finding voice in Hank Hill's flawed but admirable character.

ABC was unwilling to give the show enough rope to find a similar voice. Under other circumstances, that would be understandable. Given the track record of Mike Judge, compared to the cost of development and the first season, playing out another 13 episodes, maybe another 26 scripts makes a lot sense.

I didn't enjoy the show, let's be clear (but I don't enjoy most half-hour television, either). The voice work, in particular, was a flight or two down from the top notch work on "Beavis and Butthead" and the even better "King of the Hill". From a business/programming point of view, ABC's cancellation shows a distrust of animation. Success on Comedy Central will only help with the economic viability of character/script based animation for adults.
Posted by roconnor at 6:14 AM

You have inspired me since before I ever saw your animation actually moving (when I read the Canemaker making-of book on "Raggedy Ann" ... it wasn't until a couple of years later I actually found a VHS copy of Raggedy Ann to watch.)

In the years since whenever I have learned more about your work (from people like Mr. R. Williams, Mr. M. Sporn and Mr. R. O'Connor) I have been even more inspired.

You are a true example of the artist as animator and animator as artist. You've been a "Disney animator" outside of the Disney system and shown that top-quality character animation resides in an animator irregardless of the studio they happen to work for .

Thank you for showing the way it's supposed to be done.