In the olde days, the 20th Century, there was an electronic stock ticker whose red diodes read "HOW MANY TEXTS?". All day. All night. Inches above Pak Punjab on Second Avenue. 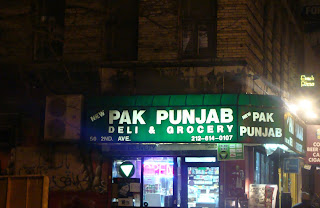 Oddities are a quick casualty of the Sex-in-the-Citification of New York.  After the Giuliani scrub down, what was left but for the Bloomberg administration to usher in an epoch of shoe shoppers and condo developments?

A few blocks south of Pak Punjab, on the north side of East First, a lucky pedestrian at one time could have caught an unscheduled performance by "The Cat".

I don't know if that was an official name, that's what we all called him -"The Cat".  He'd stand in his window, strumming fuzzed out power chords while wearing a unitard and what appeared to be a sort of cat mask.  From his feet psychedelic swirls projected onto him, blurring his features and gestures in a wave of color. 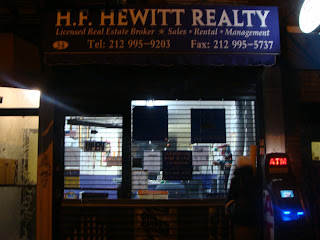 Today, The Cat's cave is a real estate broker.

Just down the street was one of my favorite urban pieces of art.  On the Lindsay Gate of "Abbetta" a sad sack rendition of Bart Simpson with a welding mask and torch, a word balloon exclaiming "Boiler Man, Dude!"

I don't know what it meant.

Today that garage has been turned into a fancy bistro. 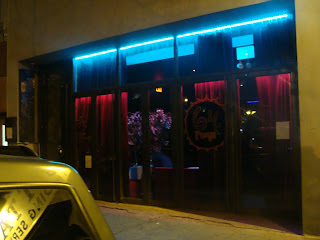 Abbetta has kept it's adjacent garage, albeit with less memorable art. 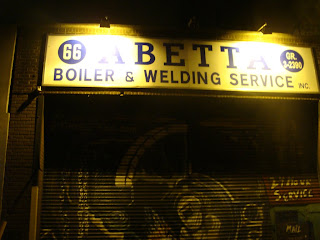 My childhood exchange in Philadelphia was DE-8.  That stood for DEvonshire.  I doubt many people under 35 would have even heard of such a concept.
Posted by roconnor at 5:17 AM

Speaking of vanishing relics, let me know if you want to check out the Vitagraph tower again. There'll be less leaves for sure this time of year.