Kate remains the only personal friend to have given me work -a short lived advice column for Jane Magazine.

Several months back, Ed Smith gave me a stack of union newsletters from the 40's and 50's.

There's a near complete run of the East Coast newsletter from the first issue up to the mid-50s.  Those are in fair condition.

He also gave a stack of newsletters from Screen Cartoonists Local 852, Hollywood.  These start 1/17/44 (Vol 2., No. 71).  They're extremely fragile and in an effort to preserve them, we'll be posting them occasionally.  A cursory search hasn't found them in any online archive.

We'll do our best to keep these chronological.  The originals are in rough shape, so its likely that some will fall out of line.  For those interested we're creating a "union newsletter" label which will sort only these.

A slight correction is applied to reduce the discoloration in the paper. 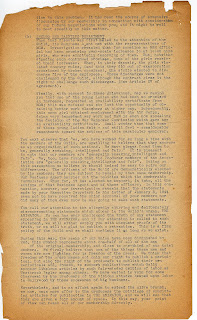 The first page and a half are comprised of a letter from Anthony G. O'Rourke, Executive Secretary of the Animated Film Producers Association to the Union, stating complaints about slowdowns at MGM in the Assistant Animation and Ink & Paint departments.  It goes on to accuse the Union misrepresenting and "slurring" the Producers.    It ends with a "request [for an] indication of the board's consideration of the situation and a statement as to the future practices of the Guild..." Ultimately pointing out that the Producers don't have these problems with other guilds. 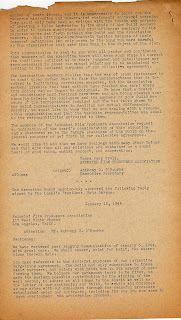 As an author many angry business letters, I will say the AFPA drafted a good one.  It sets up the standard which they expect, lays out the complaint, asks the party to suggest a solution -all while being firmly (but not emotionally) pissed off.  The way the letter is phrase allows only one response to it's logic.

The Guild does not agree with the Producer's starting point, despite the logic of the letter -the contents are in dispute.

They go on to address the letter point by point. 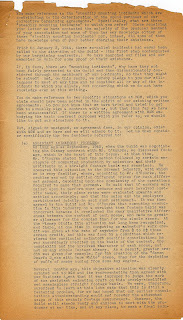 The first "work slowdown" issue relates to assistant animators.  The Guild expected their work to be recognized on complexity, MGM pooled it all together.  The example: "Greater credit was given for the creation of the 'Seven Dwarfs Dance with Snow White' scene, than for the depiction of puffs of smoke coming from some toy engine".

When that dispute was first called to the attention of the Guild, its Business Agent met with the representatives of MGM.  Investigation revealed that for sometime an MGM official had been promising over-scale increases to at least nine girls, who were admittedly deserving of them.  But, notwithstanding such continued promises, none of the girls received their increases.  When, in their despair, the girls violated company rules, (and this they did out of exasperation occasioned by broken promises), the studio elected to discharge five of the employees.  These discharges were not challenged by the Guild, although the contract gives it the right to challenge such discharges.  (See Article XV of agreement).

Finally, with respect to these grievances, may we remind you that one of the young ladies who had been so promised an increase, requested an availability certificate from MGM; this was refused and she lost the opportunity of obtaining better work elsewhere at higher pay.  Subsequently, this same girl obtained employment with the Air Corps, doing very important war work and MGM is even now appealing the decision of the War Manpower Commission which gave her an availability certificate.  Small wonder then that some of these young ladies felt- and still feel- considerable resentment toward the actions of this particular employer.


This situation is not resolved in this issue.