Cordell Barker has put up a "blog" or two from Sundance. His "Runaway Train" is playing there.

How will the Liberal elite of Hollywood react to its rustic charm from the Great White North? 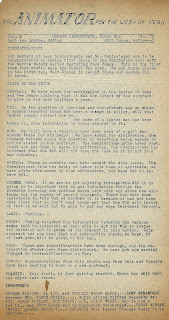 Note how Warner Bros. is referred to as Schlesinger's. We've come to call all the Merrie Melodys by their distributor's name. Warner's didn't buy out Leon until later in 1944.

Issues on page one. Six days of holiday per year/per contract. Overtime and out-of-town pay at Disney. A vacation issue with MGM. Sick leave at Schlesinger. Over-minimums at Screen Gems going before the War Labor Board. Lantz- Nothing. Retroactive wage increases at Wolff. Job reclassifications at Pal. Bunin, meeting on new contract. Plastic [I don't know plastic]: "This studio is just getting started, there has only been one minor case there."

Then some news of marriages and GI visits. 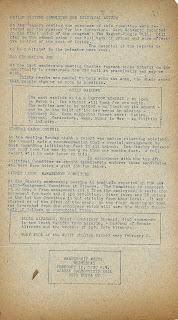 Back page concerns national labor events -the AFL advising that returning veterans have initiation fees waived (or even paid one month dues). Two deaths are noted, both women. One, Eddie Alvarado, on service in the South Pacific.
Posted by roconnor at 6:41 AM