It's hardly an exaggeration to claim that he may stand as the greatest American caricaturist.  Sure, he was no Daumier, his jabs could be sharp but they were rarely visceral.   Politics in America, they're nothing like the Second Empire.  Revolutionary? Forget it!

David Levine's work represented what our society could be -literary, witty, inventive. 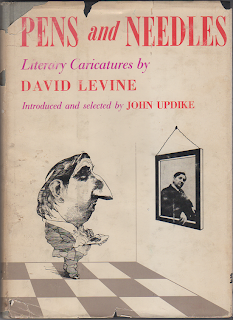 Last year also saw the passing of another great, John Updike.  Updike was inspired by James Thurber and as a  young man wanted to be a cartoonist.  Maybe even an animator for Disney.

I was introduced to Updike's work in Sophomore year of high school with his short story "A&P".  That summer and the next few years I read everything I could of his.  "Rabbit at Rest" hit the shelves right around this time, I found out first in a headline on "The New York Review of Books".  Surely illustrated by David Levine.  I would have had no idea who that was.  At the time I dreamt of becoming John Updike.  Who would have guessed this path to animation?

Twice I met David Levine.  The first time was at The Ink Tank.  R. O. Blechman was on the board of the Swann Foundation and offered our space for its yearly grant review meeting.  Also on the board were Ed Sorel, Art Spiegelman  and a few academics.  And David Levine.

While bringing in water, I mentioned to him that I would go to a Chinese restaurant in Brooklyn Heights decorated with his work.  He was immediately engaging.  "Really?"  "Are you an artist too?"  "Do you live in the neighborhood?" No, my then-girlfriend did.  "You should stop by sometime!"  "She's an artist, tell her to come over!" et c., et c. with all the kindness and warmth of an old friend.

We didn't take up his offer for a studio visit.  A few months later we stopped eating at the restaurant.  They redecorated and the food had always been awful.

I never got to meet John Updike, although I considered calling him up on occasion just to introduce myself and say hello. I don't know if he ever got to work in animation.  His writing was probably deemed "too mature".  That's a great shame, I imagine it would have given him an immense thrill to have seen his words come to life the way he dreamed as a child. 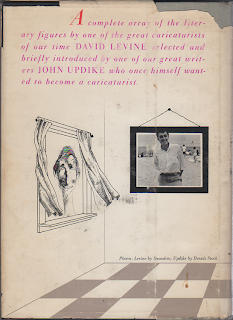 If you happen to be in Brooklyn, the antiques store Holler and Squall, which is on Atlantic Ave next to Montero's bar, has two original Levine drawings for sale. They are from the classic literary portraits period (Sitwell and Beerbohm). Pricey at 2000/1800 but it is nice to see the originals, which are smaller than I expected.