Sunday I mentioned WWII cartoon insignia. On page three of this week's Top Cel, it discusses Walter Lantz' recent insignia for a torpedo squadron out of San Diego. 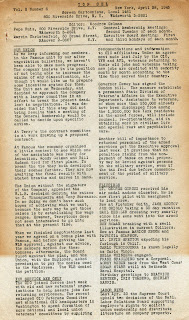 As we keep informing our members in the Famous unit by our after negotiation bulletins, we haven't been able to make much progress.  The company insists in its position of not being able to increase the minimums of any classification, although it would like us to prepare some incentive system for them.  The Unit met on Wednesday, and decided to approach the company with a lager committee in an effort to break the present deadlock in negotiations.  It was decided that if this step did not bring results that a meeting of the  General Membership would be called to decide upon specific action.

At Terry's the contract committee is at work drawing up a proposed contract.

At Famous the company organized a little contest to see which one of the assistants was ready for Animation.  Woody Gelman and Bill Hudson tied for first place.  To break the tie they both developed their scenes further.  They are now awaiting the final results with abated breaths and knives in hand.

The Union without the signature of the Company, appealed the WLB decision denying the raises to C. Vinceguerra and Tony Screazzo.  In so doing we don't have much hopes of achieving what we want, because the sure way to get those raises is by establishing the wage ranges.  However, Terrytoons does not seem interested to go into that at the present time.

When we finished negotiations last year we agreed on a bonus plan with Famous, and before getting the WLB approval, against our advice, the members worked for these bonuses.  Afterward, the Board ruled against the plan, and the Union, with the Employer, asked permission to pay the monies owed to the Employees.  The WLB denied the petition.

FOR SERVICE MEN ONLY

The CIO joined forces last week with old and new veteran's organizations to help assure jobs for returning servicemen.  The recent enlarged CIO Veterans Committee met at national CIO headquarters in Washington to speed formation of more national and local union veteran's committees by supplying recommendations and information to CIO affiliates.  Under an agreement made last July by the CIO, VFW and AFL, veterans returning to their old jobs and veterans taking new jobs are credited with seniority month by month according to the time they served their country.

Governor Dewey has signed the Condon bill.  The measure establishes a permanent State Division of Veterans' Affairs in the Executive Department.  Assistance to veterans, of whom more than 230,000 already have been discharged from among the 1,200,000 New York residents in the armed forces, will include counsel, re-orientation, aid in obtaining work in civilian life and special rest and psychiatric care.

Another bill of importance to returned personnel of the armed services got the Executive approval last week.  It provides that no penalties rising from the non-payment of taxes on real property may be levied against person in the military service, even if the tax fell due before commencement of the period of military service.

Saul Kessler dressing very smartly since his sons went into the armed services.

Dun Roman breaking with a swell illustration in current Colliers.

Morey Reden back from the West Coast. 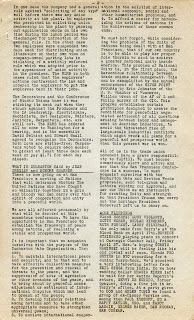 In one case the company had a general rule against "soliciting of any type" well before there was any union activity in the plant.  An employee who persisted in soliciting union membership in the plant by passing out application cards on his own time during the lunch period was discharged for infraction of the general rule.  In the other case two employees were suspended two days each for distributing union literature on their own time on company-owned parking lots in violating of a strictly enforced rule which was adopted prior to the appearance of union activity in the premises.  The NLRB in both cases rules that the employers' actions contravened the law and ordered the employers to put the employees back in their jobs.

The Decorators and the Conference of Studio Unions knew it was sticking its neck out when they struck against the Producers and the IA leadership.  Electricians, Machinists, Set Designers, Painters, Janitors, Carpenters, etc. are still out. The NLRB has ordered all to come to Washington for a hearing, and in the meanwhile David Selnick and Edward Small agreed to recognize the Decorators.  Both lots are strike-free.  Carpenters voted to require each member to picket at least three days each week or pay $1.71 for each day missed.

WHAT IS DUMBARTON OAKS by JEAN DREXLER and HONORE SHARRER

There is now going on at San Francisco a meeting of Nations that will determine whether The United Nations who have fought so valiantly together in a grim and bloody war can carry over that spirit of cooperation and unity into a peaceful world.

We are all affected personally by what will be decide at this momentous conference.  We have the opportunity in San Francisco to establish the framework of peace among nations, of realizing a stable and prosperous world.

It is important that we acquaint ourselves with the purpose of the Dumbarton Oaks Organization.  They are:

2. To develop friendly relations among nations and to take other appropriate measures to strengthen universal peace;

4. To afford a center for harmonizing the actions of nations in the achievement of these common ends.

We must not forget, while considering the problems of the Unity of Nations being dealt with at San Francisco, that if our own country is to be able to play her proper role therein we need to achieve a greater national unity inside America.  This problem of National Unity is, in the first place, the harmonious relationship between trade unions and management.  This can be exemplified by the mutal endorsement of the SEVEN POINT PROGRAM by Eric Johnston of the US Chamber of Commerce, William Green of the AF of L and Philip Murray of the CIO.  This program establishes certain principles designed to create the conditions for peacefully negotiated settlement of all questions arising between labor and management in American Industries, to avoid the threatened rise of large-scale industrial conflicts which might wreck all plans for a peaceful and prosperous world when this present war is won.

All of us in the trade union movement have a grave responsibility to fulfill.  We must become consciously alert and active and see that the San Francisco Conference is a success.  We must become consciously acquaint ourselves with the Dumbarton Oaks and Bretton Woods proposals, send telegrams and letters voicing our approval, and use our Union as an instrument for creating Unity and strength so that President Truman can carry out the heritage President Roosevelt left us to carry on. 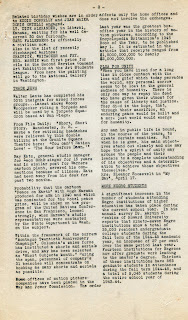 Belated birthday wishes are in order to Eddie Donnelly and Jean Maier.

Also in the list of recently discharged Marines:  Chadwick, Whitacker and Fey.  Reg Massie won first prize for oils in the Second Service Command Art Exhibition at the Art Students League.  From her the painting will go to the National Gallery in Washington.

Walter Lantz has completed his 30th insignia for armed force groups... Latest shows Woody Woodpecker riding a Torpedo and will be used by a Torpedo Squadron based at San Diego.

From Film Daily: "Short, Short Story.  Manchester, NH -Maybe a few rationing headaches were relieved by this double billing at the Granite Square Theater here: You can't Ration Love! - 'The Hour before Dawn.'"

Ray Katz, general studio manager for Leon Schlesinger for 15 years and in similar post Warners cartoon plant, severed his connections because of illness.  Katz had been away from his desk for past two months.

Probability that the cartoon "Peace on Earth" with Hugh Harman produced for MGM in 1940 and which was nominated for the Nobel peace prize, will be shown on the program of the United Nations Conference in San Francisco, loomed strongly, when Harman's studio representatives were contacted by the State Department in Washington on the subject.

Within the framework of current "Montague Twentieth Anniversary Campaign", Columbia's sales force has instituted a shorts and serials drive, and May has been selected as "Short Subjects Month."  During the span, personnel of company's 31 branches will concentrate on booking as many shorts and serials as possible.

Home offices of motion pictures companies have been placed in the War Man Power Commission.  The order affects only the home offices and does not involve the exchanges.

"When you have lived for a long time in close contact with the loss and grief which today pervades the world, any personal sorrow seems to be lost in the general sadness of humanity.  There is only one way to repay the dead who have given their utmost for the cause of liberty and justice.  They died in the hope, that, through their sacrifice, an enduring peace would be built and a more just world would emerge for humanity.

Any man in public life is bound, in the course of the years, to create certain enmities.  But when he is gone, his main objectives and a determination to achieve those objectives themselves."

A significant increase in the number of students attending Negro institutions of higher education has taken place during the current school year.  In his annual survey Dr. Martin D. Jenkins of Howard University reports that ninety-seven Negro institutions show a total of 35,033 resident undergraduate college students during the fall term of the 1944-45 academic year, an increase of 27 per cent over the same period last year.  Fourteen institutions for Negroes now offer graduate work leading to the master's degree.  Thirteen of these institutions have 565 graduate students in attendance during the fall term 1944-45, and a total of 2,043 students during the entire school year of 1943-44.
Posted by roconnor at 7:40 AM