Yesterday I learned of the passing of my favorite college teacher, Jean Le Courbeiller.  He was, ostensibly, a science and mathematics teacher at a college which didn't even have a science section in the library (one could concentrate in "Mind, Nature and Values" if they wanted to try bucking the system).

I still recount his story of growing up on Isle de la Cite in the middle of the Seine.

One day, when he 8 or 9, he bicycled in the rain to his girlfriend's apartment.  There was often a man standing in lobby and today the man asked him about the rain. "It's raining, yes."  "Oh yes, it's raining."  "It's raining hard, isn't it?"  "Very."   The conversation was interrupted by the girl's mother who came yelling at him for coming out in such foul weather.

The man was asking about the rain because he was blind.  A few years later young Jean learned that the man was not just blind, but his young sweetheart's neighbor was James Joyce.

You can master language, and still lose something we all take for granted.

In one of his classes he remarked that Isaac Newton was the last man on earth who could possibly know all there was to know.  Newton, being the smartest man of his age, might well have known all the science and math and history and literature that [Western] Civilization contained at that moment. 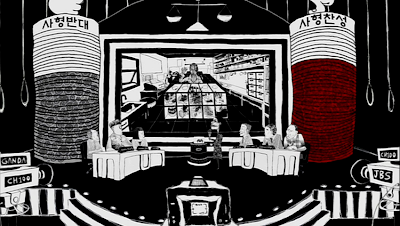 Even in a field as limited as animation, I'm learning new things all the time.  Things other people already know.

I didn't know, for instance, that the Korean Academy of Film Arts produced a feature length collaborative project as a senior thesis.  Actually, I may have heard that and forgot -which goes to another point from Jean: learning is re-learning.

It's questionable to put students to work on such an endeavor.  The school is there to further the progress of the students, not the other way around.   There are benefits to the students, sure, but that doesn't ameliorate the lapse of ethics on the part of the school.

The Korean Cultural Society presented a screening of The Story of Mr. Sorry last night at the Tribeca Film Center.  This collaborative graduation effort kicks off a series of four free screenings of animated Korean features.

The film itself is interesting and hangs together very well for a work with five credited directors.  We're not privy to the actual hierarchy of artists, so I suspect there was one lead voice with vocal contributions from the others.

The design is sometimes nice.

The narrative, based on novel, is just slightly off in that Korean Cinema way to keep it from being completely fulfilling. It's as though they've digested American film, try to recreate it, but come up with something strangely similar but vastly different.

In his course "Four Ways of Doing Astronomy", I learned from Jean le Corbeiller that the Sumerians looked to the horizon for their astronomy. All their science, all their mathematics -like the 360 degrees in a circle -derived from calculating the relationship of the stars to the visible edge of the earth.

These days our astronomy is almost completely mathematical. There's little observation with the human eye. Data is collected through non-ocular telescopes, decoded and translated into information we can understand.

Neither method is better than the other.  They just respond to the differing needs of the cultures that support them.
Posted by roconnor at 7:38 AM