1991 doesn't seem that long ago, it's the year I came to college in New York.

Manhattan still had "bad neighborhoods" -a walk down Avenue B was a stroll through an illegal pharmaceutical superstore and there were small scale riots downtown when Dinkins cleared Tompkins Park of squatters -but, on the whole the town probably resembled what the city was to become more than what it had been. 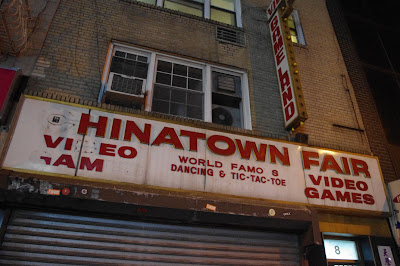 There were still vestiges of absurdity -oddity outposts that represented why we come to big city.

The seen-it-all cabbie from the movies who bellows "Only in New Yawk!" when, say a schnauzer stiff him with some milk bones for a tip -he's left with less and less to gripe about.

Twenty years ago, a college kid looking for an afternoon's entertainment might have wound up at Chinatown Fair after scouring record bins and before grabbing an ice cream cone.  Before getting to the Dig Dug or Ms. Pacman he would have been greeted by the Tic Tac Toe Chicken.

It was a horrible game.  You dropped in a quarter and played tic tac toe against the bird.  A tie was considered a victory for the hen prompting a carnival game voice to exclaim "Chicken Wins!  Chicken Wins!" while the bird did a little dance.

The bird danced because it stood on a meshed wire floor and little charges of electricity would surge through at the finale.  So the chicken never really won.

One day I stumbled in -probably around 1996, 97.  There was handwritten sign tacked up.  "Game out of order.  Chicken dead."

It was replaced with one of those plastic egg dropping chickens which eventually gave way to one of those claw games or something.

Now the arcade has apparently shuddered for good- possibly to convert into an American Apparel or a Duane Reade or a bank.

New York is no place for weirdos or strategic foul.  It's now a mecca of shoe shopping and inelegant bankers who trample on peculiarities that once fostered genius.
Posted by roconnor at 7:48 AM

I remember a bit of this era. I went to SVA in late '90s when East 23rd street was rather seedy. We'd run past the SRO flophouse known as 'The Kenmore.' The tenants of which we had pet names for, and we'd see them everyday in pharmacies, magazine stands, and fast food joints all throughout the neighborhood, launching into schizophrenic episodes and just generally talking to people who weren't there. I walked past the Kenmore a few years later and it had been converted into a luxury apartment building. Plastered right on the front of the building was a plaque thanking Giuliani for all the work he'd done to convert it...

SVA even had a dorm that shared space with, I think, a seedy YMCA.

That's closer to the Taxi Driver New York art students should be exposed to.

I hear there's an opium den above the Chicken, so there are small pockets of sin left. Though I bet even that is crowded with vulgaratti crowing about their Jimmy Choos.

i loved the late 80's in the east village. i have to say that the mars bar, one of my favorite seedy bars from that time, is still in business.

The Mars Bar is under constant threat of being closed down.

That's a perfect example, it's a disgusting, awful place but it's still completely great.