Minus One For Clapping

Like many longish-timers in New York animation, I have an on/off relationship to ASIFA.

Over the past two weeks they've been screening entries for their upcoming awards show.  It's always a mixed bag, there's not much anyone can do about the quality of entries.  Except, of course, to enter films of decidedly high (or low) quality to tip the balance.

The Independent shorts are typically the highlight.  For whatever reason, this year they were the weakest program.

My favorite from that evening was Morgan Miller's Vacuum Attraction. 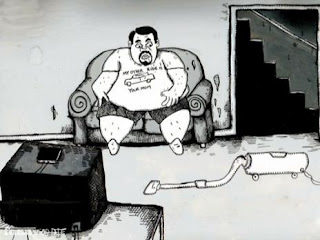 It's kind of crude and more than a little lewd, but the characters are well defined and the creative vision is precise.

Two things that attract me to ASIFA are its history and its and outreach.  The student films can be exciting and innovative.  Young artists provide fresh blood for untalented creative vampires like me.

I missed a small chunk of the student films.  I see Kelsey Stark's film was in the first few (I've seen it a few times, and it would probably rank in the top of all films shown).

And an unexpectedly great, somewhat unfinished film by Kevin Dossantos titled My 1st Invention. It matches up with Morgan Miller's in some ways, but it's much cuter. No sign of it online.

The history of ASIFA has some meaning and these screenings are reminders. I'm reminded of George Griffin saying how your job in the audience is to program a festival. A festival that is emblematic of New York's relationship to animation.

As fun as it may be to moan and cluck from the auditorium, it's a serious task if one takes animation seriously.

That's why I find the clapping and hooting for personal favorites obnoxious. A member has a vote, yes. That vote has meaning, but screenings aren't about you, hooting voter. They're not even about the films, per se, or the film makers. The ASIFA show, the awards, represent Animation. It represents New York, community, for better or worse, and the continuum of an art form from Stars & Stripes Prods. Forever, Inc. "Sparklettes: Desert" (the first best in show) and the great Sesame Street films of the 70s (Jerry Lieberman's Parrot capturing 1972 title) and Suzan Pitt's Asparagus and Michael Sporn's Marzipan Pig and John Schnall's Grim to the groundbreaking, individual artists of the future.
Posted by roconnor at 7:47 AM

Kevin Dossantos was one of my students last year (he had already made My 1st Invention before I taught him).
He's a natural animator and a very funny guy.
His senior thesis film is similar in tone.
I suggested a better ending for it that he deemed too filthy, which is quite a call coming from him.

Excellent piece, Richard. You've captured all that I hate and love about ASIFA East voting. Unfortunately for me, the ate has outweighed the love in recent years, so I've chosen to pass. This is cowardly of me, but that's what happens when you get older.

Your vote is missed, Michael. As are you suggestions for how you would make the process better. This year, we created sep categories for Music Videos, Experimental films, and Educational films. What you may not realize is that our process is always in flux. We have a lot of debate each year on how to improve things and keep relevant. Please get us your feedback. We'd like more love than hate too.