Here's an article from the March 6, 1977 The New York Times Magazine marking the 20th Anniversary of the Pushpin Graphic.  Written by Harold T. P. Hayes 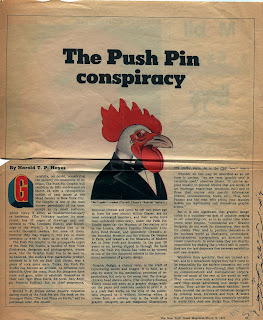 Gratefully, no doubt, considering the unlikely circumstances of its origin, The Push Pin Graphic will celebrate its 20th anniversary on  March 24 with a retrospective exhibit of past issues at the Mead Gallery in New York City.  The Graphic is one of the least known periodicals of its time, except to its small audience, which views it either as counterrevolutionary or irrelevant. (The February number, its most recent, has 32 pages of drawings and text devoted to "The Complete History and Knowledge of the World.")  It is mailed free to its several thousand readers, but none of them, however they may regard it, will pay as much attention to what it says, as to what it shows.

The Push Pin Graphic is the propaganda organ of the Push Pin Studio, a handful of New York illustrators, designers and photographers whose work, like the Graphic itself, has to be seen to be believed.  The studio's first marketable product, rendered in a loft on East 13th Street, was a gross of cork place mats.  Today, the Push Pin Studio has become an attitude, its influence considerable.  Over the years, Push Pin designers have come and gone, some to establish themselves in their own right (Paul Davis, Ed Sorel, Sam Antupit, Reynold Ruffins). But its chief proprietors,  Seymour Chwast and (until he left two years ago to form his own studio) Milton Glaser, are its most celebrated members, and heir works have been exhibited collectively, under the Push Pin Studio name (at the Museum of Deocrative Arts in the Louvre, Milan's Castello Sforzesco, London's Reed House), and separately: Chwast's at the Brooklyn Museum and the Galerie De Delpire in Paris, and Glaser's at the Museums of Modern Art in New York and Brussels.  In the past 20 years or so, having slipped in through the back door, the Push Pin Studio has come to be viewed as one of the two dominant schools in the international movement of graphic design.

Graphic design, a clumsy term, is the craft of reproducing words and images.  It is held, as a ship by water, to the mechanical processes of reproduction, but only in the sense that the strange chicken head shown above (The Graphic's Eustace Tilley) could not exist as a graphic design without the paper and machines needed to print it.  It is a craft that works on the eyes of the public, who respond to it without knowing where it comes from.  A subway map is the work of a graphic designer, so are magazine illustrations, and traffic signs.  So the CBS "eyes" and NBC's controversial N.

Whether all this may be described as an art form is unclear.  "As the term 'graphic arts' is currently used,"  observes Glaser, "it can be applied equally to printed objects that are works of art (etching, engravings, woodcuts, etc.) and to those that convey only specific information (menus, announcements, books, etc.).   Thus, both Picasso and the man who prints your laundry tickets can legitimately call themselves graphic artists."

But it is also significant that graphic design today is a business -an arm of industry seeking to sell something -or, as in an earlier time when terms were simpler, "commercial art".  Graphic designers do not work for themselves; they work for clients.  They tend to position themselves in the business world as illustrators, printmakers, photographers, typographers, art directors and visual consultants.  In some cases they are directly responsible for making the product sell; in others, they are the last desperate line between sensibility and raw avarice.

Whatever their specialty, they are trained artists, and to a remarkable degree they have come to be responsible for the surface cosmetics not only of American society but -through their influence on communications and multinational corporations- of much of the rest of the world as well.  They consult now with architects and city planners; they shape advertising and design trademarks.  They advise on museum exhibits.  Some have invaded the territory of industrial designers by creating tools, furniture and toys.  A select few of them have created this country's exhibits at world fairs.  And one design firm, Chermayeff 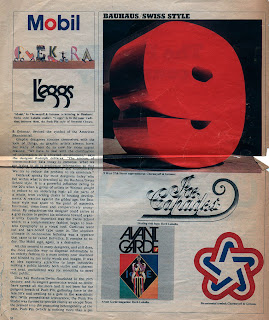 & Geismar, devised the symbol of the American Bicentennial.

Graphic designers concern themselves with the look of things, as graphic artists always have, but many of them do so now for more urgent reasons: "We have to deal with the clarification of information in a crowded environment," says the designer Rudolph deHarak.  "The amount of communication data today is immense.  What we are trying to do is synthesize information so that it may be conveyed efficiently and economically.  We try to reduce the problem to its essentials."

DeHarak speaks for most designers today who fall within what is described as the Bauhaus/Swiss School style.  It is a powerful influence dating to the 20s when a group of artists in Weimar sought to reduce to an underlying logic all the pars of a whole, from rocking chairs to housing developments.  A reaction the gilded age, the Bauhaus style was spare to the point of austerity, functional, clean-lined and comparatively anonymous.  By reductivism the designer could arrive at a grid system to project his solutions toward organic unity.  Equally important was the Swiss School which, in a complementary fashion, began to reassess typography as a visual tool.  Curlicues went out and bare-boned type came in.  The absolute ultimate in no-nonsense lettering was a typeface that came to be called Helvetica.  It remains today.  The Mobil sign, again, is a derivative.

All this seemed to many designers, and still does, the most sensible way to dispense information in an orderly fashion to a mass society near deafened and blinded by too many words and images.  It was an idea especially attractive to large industries seeking a public identity both visible and coherent -a neat, uncluttered way for monoliths to meet their public.

Thus has Bauhaus/Swiss flourished in the 20th century, and its elegant geometrics would no doubt have spread all the more had it not been for the pungent breath of Push Pin, gathering force in the late 50s and swelling to a gale in the anarchistic 60s.  With premeditated irreverence, the Push Pin Studio was formed to provide clients an escape from the present into the reassuring heterogeneity of the past.  Push Pin (which is nothing more than a pin 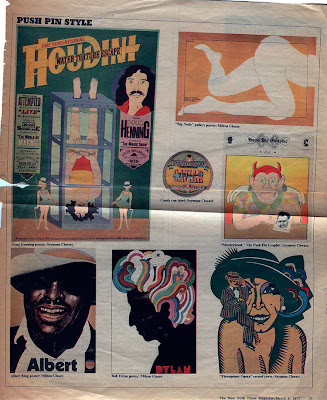 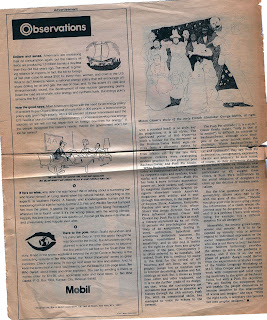 with a rounded head) is no style, say it progenitors, it is all styles. The celebrated poster of Bob Dylan -as much a banner for the movement as the Bauhaus/Swiss Mobil sign -derives from a silhouette cutout by color motifs from Islamic art. By the late 60s, museum curators were cataloging modern graphics by two generics: post Bauhaus/Swiss, and Push Pin Studio.

While Bauhaus/Swiss is more visible today as institutionalized art- through its corporate signs and symbols, trademarks and annual reports -Push Pin has been a more intimate expression: poster art, book jackets and, especially magazine illustration. Graphic designers elsewhere watch American magazines with avidity, and it was through this medium, in the pages first of Esquire, Show, Audience, Ramparts, Playboy and later New York, where Glaser was design director, that Push Pin's influence spread. Glaser and Chwast say Push Pin is in fact as much a literary statement as an art form. It pursues the psychological implications of an assignment, dealing in irony, indirection, hyperbole and sometimes deliberate nonsense. Its artistic commitment is, first, to sensibility, and to this end it insists on the right to draw from any graphic element of the past. Consequently it is often referred to as nostalgic, and indeed, Push Pin is credited by many in the field for the revival of Art Nouveau and Art Deco, not only in graphic design but as manifest now in interior decorating, fashion and furnishings as well. But it draws as freely from other and older traditions, and it is to the further credit of its designers that, while the contemporary art history through the 19th Century, Push Pin, with its commercial skills, has managed to voice its echoes to the present.
Posted by roconnor at 7:26 AM