While Jason melees with his own skeletons, we cut to action elsewhere. 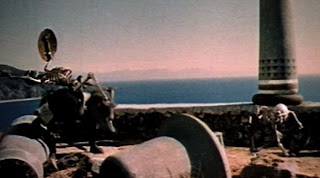 We don't get too many true "fight" sequences in films these days. That wouldn't be such a bad thing, if the fight sequence hadn't been replaced with the indecipherable scrum and jump cut chase. 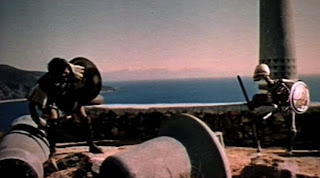 A fight from the olden days of Hollywood would involve a lot of choreography -like tossing a skeleton over your back. 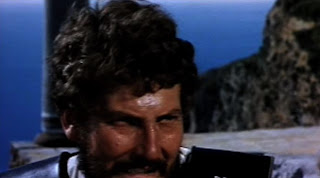 In the previous, the Argonaut is starting to stand up.  We cut to him low in the frame and rising. 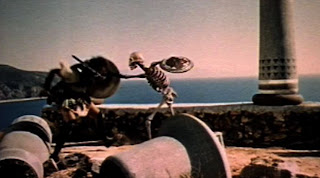 And the skeleton attacks. 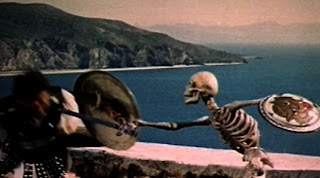 Cut in.  Nice cut to approximately match the final position of the wide. 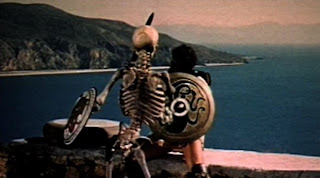 And the action spin us around.

In animation, the simplest way to determine a new scene is if the background changes -and determining what constitutes a scene is of prime importance to managing production.

When you look at stills like these, shot by shot, you can see that.  It also helps to visualize the sequence backwards into storyboard.
Posted by roconnor at 4:35 AM

Email ThisBlogThis!Share to TwitterShare to FacebookShare to Pinterest
Labels: jason and the argonauts, scene study