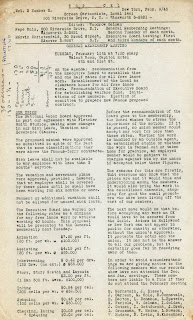 GENERAL MEMBERSHIP MEETING
TUESDAY, February 13th at 7:30 sharp
Walnut Room, Capitol Hotel
8th and 51st Street
on the agenda: recommendation from the Executive Board to establish time and one half rates for all freelance work.  Establishment of Local as clearance house for all freelance work.  Recommendation of Executive Board for establishing welfare fund.  Initiations of new members.  Election of committee to prepare new Famous proposed contract.

The National Labor Board approved in part our agreement with Fletcher Smith Studios, making some changes in our Sick Leave, Vacation and Severance Clauses.

The proposed minimum were approved as submitted in spite of the fact that in some classifications they were above the Famous-Terry contracts.

Sick leave shall not be available to any employee with less than 3 months service.

The vacation and severance plans were approved, provided, however that no employee shall be covered by these plans until he shall have been working for six months or more.

Payment or additional vacation shall not be allowed for unused sick leave.

The Executive Board has worked out the following rates as a minimum for any freelance work by artists working 40 hours.  This proposal will be presented to the General Membership next Tuesday.

Before the recommendation of the Board goes to the membership, the Board wishes to stress the importance of the motion.  If it is passed, no union member could accept any work for less than these rates.  Whether the work is handled by an outside agent, an established studio or whether the work is framed out or taken home for practice, an employed member would be subject to charges against him by the union if accepted below these figures.

The reasons for this are firstly, that everyone may know what the prices are and it would thus end underbidding among the members.  It would also bring the work to the established channels, stopping for good the small promoters who have been living off the work of our members.

The next move would be that before accepting any work on an OK would have to be secured from the Guild.  Actors in Hollywood or New York can not appear in public for charity or otherwise without the union's approval.   It protects the actor and the union.  It may not be the answer to all our problems, but it certainly goes far in remedying many of them.

In order to avoid misunderstandings we are giving notice to the following members who our records show have not attended the Dec. and Jan. meetings.  these members are liable to a fine if they do not attend the February meeting: 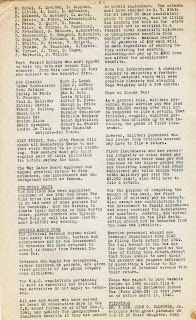 Work Permit Holders who must appear to take the oath and become full members.  From this meeting on they are subject to the absentee fine.

NEXT FRIDAY, Feb. 16th Famous will check all membership cards to see that every worker is in good standing.  New members must pay their regular part of their initiation fee before paying the dues.

The War Labor Board approved our appeal granting raises to five animators, one inbetweener and one background artist at Famous.

Tom Morrison has been appointed chairman of the 1945 Red Cross War Fund Drive for Larchmont Manor.  He is in bad need of some posters for the campaign.  Any one wishing to donate their services to this worthy cause, please contact him (Larchmont 2-1679R) any evening.

The Internal Revenue Bureau ruled that money from books, tuition and subsistence aid by the Government to veterans who have returned to school is exempt from Federal Income Tax.

Veterans who apply for telephones, either business or private, are given first priority by the phone company over civilians.

The W. M. O. regulations pertaining to work in essential and critical war activities do not apply to veterans.

All men and women who have served at least 90 consecutive days in the US armed forces on or after Dec. 7 1941, may qualify for unemployment insurance benefits if they are unable to obtain employment.  The veteran must have resided in New York State for at least 90 days immediately prior to induction, must be living and looking for work in the state and must not be entitle to a Federal total disability allowance or unemployment benefits from another state.  Maximum benefit of 20 payments of $18 each will be made regardless of earning before entering the service.  Mustering-out pay up to $300 does not affect the unemployment benefits.

Note for Infantrymen: A chemical company is marketing a featherweight material which will make possible blankets and sleeping bags weighing only a few ounces.

As a general rule, military personnel whose service pay was less than $2,000 during 1944 will not be required to file a return.  That includes, roughly, enlisted personnel and officers up to and including the grade of first lieutenant.

However, military personnel who had income from civilian sources may have to file a return.

For the purpose of computing the amount of tax owed, the first $1500 of military pay is exempt.  Also exempt are contributions by the Government to family allowances and money received for subsistence and quarters.  However, any refund of taxes owed on the 1943 declaration should not be deducted from the 1944 tax liability.

Service personnel should use Treasury Department Form 1040 in filing their return for 1944.  the full amount of the tax due for the year must be paid at the time of filing this return, except that those unable to meet their tax payment may request deferment by submitting a letter to the Collector of Internal Revenue with their return.

Those who expect to have taxable income in 1945 should file a Declaration of Estimated Income Tax (Form 1040-ES) or that year on or before March 15, 1945. 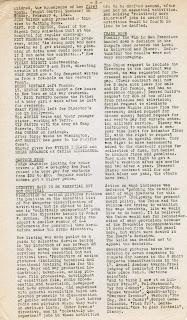 Mildred, the appearance of her first tooth, (right central incisor) on Sunday, February 4, 1945.

CAPT. ROD JOHNSON, Chief of the Signal Corp Animation Unit at the Hospital for regular check-up.

EDDY REHBERG making definite progress, says: "Am doing more and more drawing as I get stronger, am planning on doing some comic book work if I can make the contacts..." How about writing him?

STAN GREEN now a Top Sergeant writes us from a fox-hole on the Western Front.

LT. PAUL FANNING became the Father of a baby girl a week after he left for overseas.

the ADRIAN twins and their younger sister working at Terry.

VIP PARTCH with the army at Camp Roberts, CA.

After three weeks in Washington ART BABBITT has gone to the Pacific Coast.

Shower given for EVELYN IRELAND and HELEN BROMBACK at CECILE NIEWENHOUS.

Judge Magazine looking for color covers - $75.  Saturday Eve Post raised its base pay for cartoons from $35 to $50.  Regular contributors get a higher price.


INDUSTRY SAID TO BE ESSENTIAL BUT NOT CRITICAL

Production of motion pictures retains its position on the essential list of War Manpower classification of activities, but is slated to lose men in "relatively unimportant" jobs under the directive issued by James F. Byrnes.  Pictures and Radio can expect a smaller number of 2-A deferments for personnel than heretofore under the Byrne directive.

New listing was made public as a guide to Selective Service boards in the induction of men between 26 and 30.  Among the communication services rated essential but not critical are: "Production of motion pictures (including technical and vocational training films for the Army, Navy and war production industries); newsreels, motion picture film processing, development of sensitized film, radio broadcasting and television, newspaper and news syndicates, and magazines with general circulation which are devoted primarily to dissemination of public information." List leaves radio and pictures where they were on earliest lists.  Under Byrnes' directive, men in "relatively unimportant" jobs in these activities are to be drafted second, after men not in essential activities.  Men holding "relatively more important" jobs in essential activities would be fourth in line to be drafted.

Finally the WLB in San Francisco handed down a decision in the dispute case between the Local in Hollywood and Disney.  Unfortunately the results were not very encouraging.

The Union request to include the Directors in the contract was denied, as was requested for increased sick leave and severance pay.  (Their contract call now for 5 days sick leave for male and 10 for female, and has no severance clause.)  Denied Guild's request for 20% of box office from reissues and television; denied request to eliminate Producers Rights clause from the contract; denied request for dinner money; denied request for six week's pay for workers entering military service. Disney was instructed to establish a one-year time limit for Animator Class II, with the right to request extension in special cases.  They won fight to have assessments added to the check-off system for collection of dues, but denied to include fines and penalties.  They also won fight to get a week's vacation after six months and two after a year.  (Present Disney contract call for one week after one year, the others have two.)

Action on wage increases was deferred "pending the establishment of wage brackets for this industry" (Following the present Board policy, the Union and the studios are trying to establish the wage brackets, like we would like to do here).  It is believed the Union would ask for reconsideration of many provisions because of the favorable recommendations it received from the WLB panel here, but which were denied in the Board's decision.

The Guild has decided not to appeal the decision.

Seventeen pictures have been entered by seven companies to compete for honors in the 3 Short Subjects classifications in the 17th Annual Academy Awards.  Final judging of nominated films will take place Feb. 6.  Cartoons selected:

Their work has won numerous awards including Clios, BDAs and Emmys. Their work has been honored with shows at The Museum of Modern Art, The Ottawa International Animation Festival and The Art Director's Club of New York.

Asterisk has worked on feature films including "The Stepford Wives" and Merchant/Ivory's "White Countess". Brian and Richard have also created animation for numerous TV series including "Saturday Night Live", "Caroline in the City", Comedy Central's "TV Funhouse", Nickelodeon's "Ka-Blam!", and for Cartoon Network, PBS and Disney. They recently created and produced "Ghost Foot", an anime comedy for Comedy Central.

Amazing Post interesting to read. You’re doing a great job. Thanks for Writing.