While reviewing the Bill Plympton book, I pulled an old collection of his caricatures off the shelf.

Medium Rare was published by Holt Rinehart Winston in 1978, several years before he embarked on his full time animation journal.

The illustration contents are terrific and speak for themselves.  Had Bill decided to stick with caricature he may have given David Levine a run for his money.  Animation, I guess, requires just as many lines but used over a few dozen more drawings.

The introduction by George Plimpton is very funny and worth sharing. 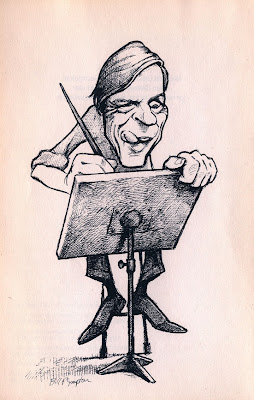 I have always envied those who practice the art of cartooning, and are good at it.  The one drawing I ever had published -when I was the editor the Harvard Lampoon and had the power to put my own material -was printed upside down, a state which my staffers, who were probably responsible, assured me was an improvement on the original concept.  Indeed, as I turned the magazine around a few times I was inclined to agree with them -though I did take exception to on of the Lampoon people who preferred the caricature lying on its side.  Since that time I have become only slightly more proficient, as the drawings on the next page might indicate.  In case the reader does not immediately recognize them as U. S. Presidents, I have identified which is which. 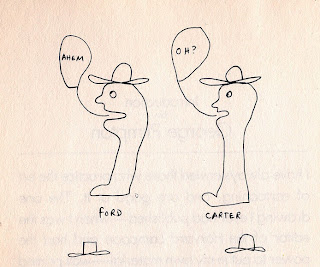 The reader will notice my hats.  I have trouble with the tops of heads, so I invariably put hats on them.  I am not bad at hats, sometimes I draw them lying around at the feet of my caricatures (or rather the foot, since I am incapable of drawing a pair legs on anyone en profile).  It will be noticed that I am not all that bad at drawing the balloons to contain the words the cartoonist's characters have in mind to say.  My trouble is with the words to put in the balloons -as is demonstrated by what I my two Presidents saying... their comments lacking a certain je ne sais quoi.

All of this is preamble to an expression of my admiration for the craftsmanship and the wit of Bill Plympton.  He is not only an admirable artist (he has no trouble with his legs at all) but he finds very funny and very perceptive things for his people to say.  How rare it is to find an artist adept at both these requirements of the great caricaturist-cartoonist.  Some are good at finding things for their characters to say, but deliver them through uninspired child-like stick people; others are draughtsmen with skill but little wit.  Plympton, on the other hand, combines artistic skills (some of his caricatures reflect a close study of Honoré Daumier) with a lively sense of his function as an artist-commentator in these parlous times -namely to present his work as a correct to social inertia.

What follows is a selection of Bill's best strips and caricatures since 1975.  Some of them ran originally in The Soho Weekly News, others  in a small-press paperback titled Tube Strips.  Many published here are new -an added fillip for those familiar with Bill's work as they commemorate the pleasure they had first discovering it.