The last post of Ralph Bakshi's "Hey Good Lookin'" showed off some of "Crazy's" eponymous animation.

This following set of scenes carries the character through the sequence, some animation is reused.


Interesting in these sequence are the background characters. 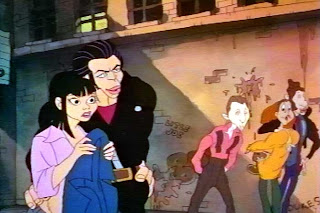 Above: The action has just happened off screen. 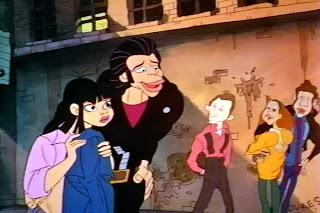 Above: Now, the character on screen is talking.  Their attention has shifted.

This is how actors train -always look at/focus on whoever the active player in the scene may be.  The audience will take their cue from the reactions of characters within the scene.

It's also a good to avoid saying something in a group situation (like a meeting you're not prepared for).  If someone asks a general question, just look at another person. 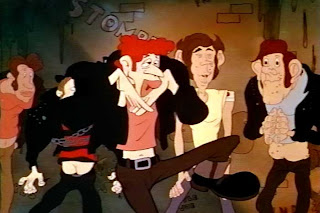 above: The same set up as before.  I love the character design of the background goons.  The one at the far right looks like a Mark Marek drawing. 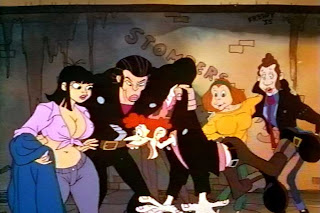 above: Here we see a slight problem with the background characters.  They can jumble the layout.

The foreground action silhouettes well.  The three characters in the background do so as well -on their own.  When put together the background animation gets obscured.  That's work that's done -only a few drawings, sure, but work nonetheless -that doesn't make it on screen.

Another complication from the olden days.  The couple in the background are on one cel, the background guy another.  That leaves two cel levels for the three foreground characters.  Either Crazy pops cel levels without noticeable color shift (an incredible pain in the ass) or they've had to go to five cels. 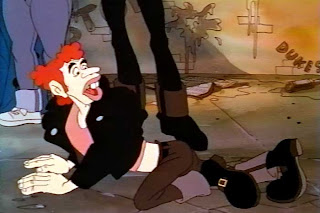 Then, in this shot the background characters give a little interest to frame.

A shot with Crazy on the ground by himself might have a very different impact than this.
Posted by roconnor at 5:14 AM

Email ThisBlogThis!Share to TwitterShare to FacebookShare to Pinterest
Labels: bakshi