I generally come back from Ottawa having overspent on a stack of books which will go largely unread.

This year there was seeming dearth of interesting printed material, so I only returned with two books (and I won't reveal how much I "underspent" on them either...). 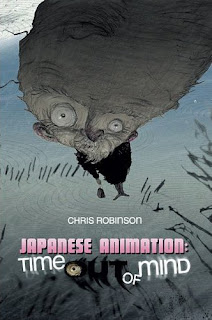 In the recently stirred ochlocratic rumbling, some folks (at least one of whom's films have been continuously rejected by this -and presumably ever other -festival) bemoaned the Artistic Director's selections and his stage mannerisms.

I may not love all the antics -no worse than many other festivals I've been to or read about, but be that as it is -he lays down a forceful disclaimer in the introduction of "Japanese Animation: Time Out Of Mind" which fairly rebukes the criticism of the rejected.


...the interviews  didn't turn out so great.  I was exhausted and sick; the questions bland and generic.  I was also tired of the same ol' approach to these books.  You know what I mean -chapter devoted to a single animator, tell the reader where the artist was born, educated, how they came to animation and then take them through each of their films, providing description and analysis.

This book does not follow that pattern. Instead, I've gutted that structure, removed "facts" about the animators and cut to the point by writing somewhat stream-of-consciousness impressions about the artists and their films.

Some of you will undoubtedly find this approach a tad different, but it's my belief that this method can better capture the essence of the subject than a conventional linear biographical method.

Indeed, some the text misses the mark.  But more often it's funny and alien and gives the same strong impression you might get from watching some of these films.

Take this analysis and  conversation with Mirae Mizui


I am swept along a path before I can choose.  Initially, there are few paths to follow, but soon new roads appear, intersecting, overlapping.  A crush of colors.

A distinctive, recurring image of a rectangular shape with what looks like an eye inside it.  Is the eye a cel, revealing the interior of human and all things?  Creatures and people roam around me beyond naked.  No flesh.  I feel like I'm seeing the world through a kaleidoscopic microscope, seeing deeper than my eyes often show me.  X-rays, showing the essence of our bodies.  See through figures.  Everything flows in and out of each other, ultimately one.  In this randomness rests chaos and order.

The prose is helped by loads of well-produced images from the films.  Side by side with these impressions I find myself getting a great sense of what the films are about.  It's infinitely more appealing than a frame by frame recap of the picture's action.

As a writer he never subjugates himself to that which he writes about, so the book doesn't reach the critical heights of a Robert Warshow or Walter Benjamin or even a Lester Bangs.  Thinking on it, it's a bit like Pauline Kael -someone who puts themself on equal footing with the art they're writing about.   Even so, its an interesting read and a valuable addition to the animation library.  The shortcomings are minor compared to the insights and experiences with these unknown Japanese filmmakers. 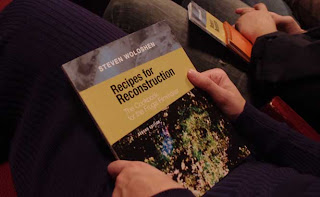 The other book I drove back is only the other side of the scale from "Time out of Mind", Steven Woloshen's "Recipes for Reconstruction: The Cookbook for the Frugal Filmmaker".

This book comes with a 9 film DVD containing a piece that relates to each chapter of the book.

He cites Helen Hill's "Recipes for Disaster" as inspiration.  I never had the opportunity to meet her and reading this book makes it sadder still.  CLICK HERE to download the pdf of her book. It's beautiful.


"Recipes for Reconstruction" is like a cookbook, giving you ingredients and directions but letting the reader take action.

It's a fun book and worth it for DVD alone.  Filmmaking workshops (and I know there are half a dozen in Williamsburg, alone, so there must be thousands across the country) and Film/Media schools could all benefit from using a lesson or two from this book -one chapter details how to make a simple contact printer with a shoebox -and those too lazy or uninspired (like me) to take the steps to create something can enjoy the cameraless animation on the DVD.
Posted by roconnor at 5:09 AM

I can't believe that you have given a positive review to Chris Robinson's latest drivel. The book is badly edited with names misspelled throughout. The blurb on the back alone spells Miyazaki, Kawamoto & Godzilla's names all wrong. Robinson's books are always more about him than the animation he claims to be promoting. I found his language disrespectful to the animators. His "prose" is not helped by the images because the images do not match the text in many cases... not that the reader would know that because it is unclear what he is talking about half the time. One's time would be better reading blogs like Anipages, Jfilmpowwow, Nishikata Film, and Angura where the writers actually know a bit about Japanese culture and art, than spending money on this nonsense.

As for spelling and captions, those are an editor's responsibility.

I make so many typographical and grammatical errors on this unedited blog that's not a stone I would even consider casting.

As for content, I understand that many people won't like it. You've listed four places they can turn for information presented in the manner you find acceptable.

There are zero other sources where we get visceral encounters with these artists.

If you're interested in dates of birth, filmographies and production pipelines this is not the book for you. If you'd like insight into the lives and minds of the creators, this book is a good starting point.

Also, anonymous commenting is cowardly. Lot's of people don't like what Chris Robinson has to say, but he always signs the page.