Filed From: The Icy North

Not so icy.  Just chilly. 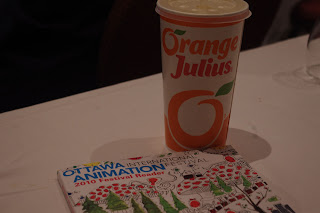 [for updates throughout the day you can follow: www.twitter.com/asteriskpix]

The morning started early with an 8:30 TAC keynote by Portfolio Entertainment's Lisa Olfman.  She is an Executive Producer on PBS' new "Cat in the Hat" series.  Her talk gave interesting and insightful detail to the development and sale of that project.  Her company is "production and distribution", it's unclear how much actual production they do.  Everything seems to be subcontracted and resubcontracted.

She's clearly a great salesperson.  By the end of her talk I was eager to see the Dr. Seuss show but was sadly disappointed to find that it's just "symbol" animation in Flash and the non-Giesel characters lack the visual charm of the originals with whom they coexist.

Also at the Television Animation Conference, Ron Diamond interviewed Jan Pinkova, who is now developing a feature film with Laika.  I haven't seen "Ratatouille" but his talk and the clip he showed were enough to put it towards the top of my list. 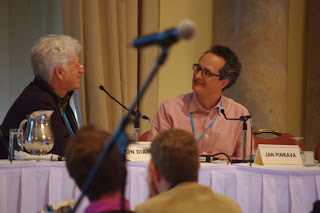 One reason I haven't the film is that I find the stories generated by Pixar pretty lackluster despite their PR machinations claiming they're "story first" -a phrase Pinkova reiterated.

The final TAC event was "Pitch This!"   A panel of TV execs hear and critique two pitches.  Most remarkable, to me, was how Linda Simensky approached and handled each prospective showrunner and their property.  She was thoughtful and measured, gave solid advice and criticized sharply without being mean (or even sounding negative).   Cool and impressive.

Cooler, though, and more impressive -in fact, if everything else in the Festival is gawddawful it would still have been a great week because of it -was Phil Mulloy's "Goodbye Mister Christie".  It is the opposite of last night's feature, "The Illusionist", in just about every way.


If I were to tell you that 80 minutes of silhouette close ups of ink blot-looking faces speaking with the "human" voices standard in most computers was hilarious, moving, captivating and downright stunning you'd tell me I was a pompous fool who didn't know what he was talking about.  Now, that may be true -but it doesn't change the fact that "Goodbye Mister Christie" is a remarkable achievement, undeniably the fruit from the mind of a brilliant and singular artist.

Most animated films which rely so strongly on spoken words tend to be visualized radio plays (even the good ones like "Mary and Max").  "Goodbye Mister Christie" has no cinematic visuals to speak of, it really is silhouette faces for well over an hour, yet no other medium could convey it so essentially.

Short Animation Program 2 was a bit of a letdown.  Picking a standout is like picking your favorite child -if you've spawned a litter of workaday, mediocre kids.  In a rareity for this festival, the individual films weren't helped by their companions in the lineup.

A universal tint of black and white or monochromes was only punctuated by a film or two with any color to speak of.  Pierre-Emmanuel Lyet's "Parade" led off with a smartly designed color based film that used the visual equivalent of puns to showcase a simple wit.  Coupled with Malcolm Sutherland's beautiful "Light Forms" (a sort of Miro meditation), "Parade" set up a colorful brightness which was paid off with dozen films in dreary palate of 1960s European animation.

In looking over the list, I can pick out several pieces which ranged from very nice to very good: Gary Leib's "Midtown Twist", "Sinna Mann (Angry Man)" -albeit overlong -by Anita Killi, Joseph Peirce's "A Family Portrait" which successfully combines rotoscoping with cartoon animation and others.  The program as a whole was a bit unsatisfying.


Then again, I could have just been anxious about the Phillies game and the Lincecum looking hoser with the toque sitting in front was a constant reminder.  Hey, Festival Goers (and Lincecum looking ones at that),  take off you freaking hats in the theater.  Maybe the big point on top was covering his head.
Posted by roconnor at 12:50 AM

The Cat in the Hat series is hideous in every way.

I can see no reason that you'd ever enjoy Ratatouille.

And the Phillies lived to play another day.