Me, Me and the NFB

Last year we drove up to Ottawa planning on stopping by The National Film Board of Canada's open house the Monday after the Festival.

Of course, it would happen to be the first time in 25 years they didn't hold the tours. 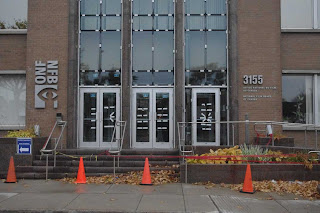 This year, it was worth the wait.

First stop was Torill Kove.  She's the 2007 recipient of the Academy Award for animated short.  No one asked to see the statue.  I wonder if the NFB keeps them in a vault with the mummy of Norman McLaren and the original soundtrack to "The Cat Came Back" on 2 inch. 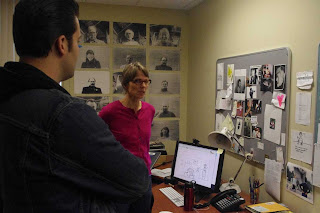 Torill's in the midst of 12 minute film being co-produced with Norway.  She showed us the real time review system she's using with her three Norwegian animators working in their home country.

The film is being made "paperless" with ToonBoom.

Next stop was Martine Chartrand who is about 75% through an elaborate and beautifully rendered paint on glass film. 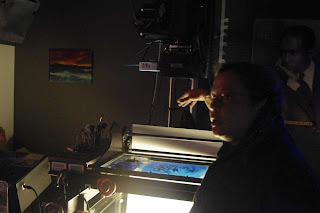 Her process is as close to cartoon animation that under camera animation can be.  She's storyboarded the film, will paint model "layouts" and even go so far as to pencil out the animation before doing it under camera.

Most surprising on the visit was Michelle Lemieux.  She's working on the pinscreen -one of two functioning in the world and the only one used for production. 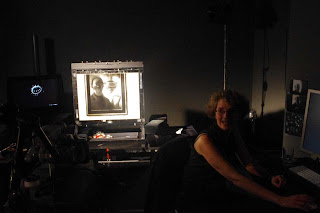 I say "most surprising" because not only is this an obscure and difficult contraption to master -she, a novice animator, has begun to produce movements far more fluid than Alexeieff and may possibly even surpass the master Jacques Drouin. 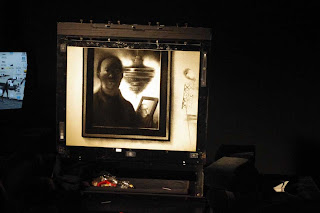 Next stop was the studio of Patrick Bouchard who is working on an elaborated stop motion film. 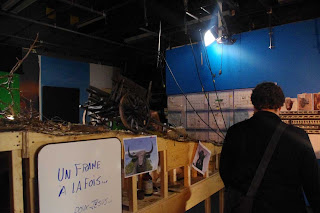 They're working at very large scale. 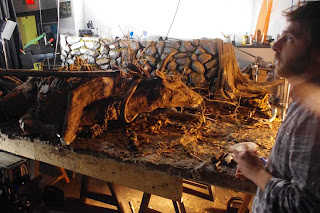 Based on the brief clip they showed, this scale has lent a solid weight to the animation.

After this we screened the stereoscopic Hothouse films.  I haven't seen "Avatar", so I'll say these pieces were the most effective 3D I've seen.  Still, they stirred a piercing pain in the front of my skull after about three or four minutes.  The approach creating this illusion is based on tricking/altering the way we see (by contrast, all previous forms of media have attempted to get closer to our natural ways of seeing).

The last stop was a visit with Paul Driessen. 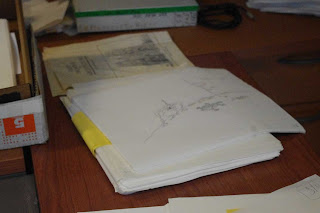 While his technique wasn't all that "exciting", seeing his animation is very exciting.

I love the loose shape shifting.  Seeing his work fresh after several years, I now see a connection to Koji Yamamura with the shifting perspectives and pinched view of reality. 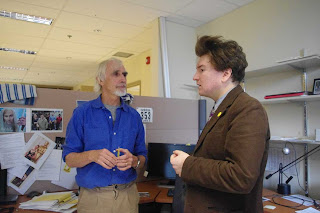 He's long been an inspiration and a favorite ever since R. O. Blechman introduced me to his work.  Bob would often call him for recommendations, two great animators -Chris Hinton and Kris van Alphen -came through the studio based on these calls.
Posted by roconnor at 5:11 AM

Glad you got here (finally) and enjoyed, Richard! Showing off the range of techniques and approaches filmmakers come with when they work with us is a bonus of the Open House.

And filmmakers keep their awards. Torill's Oscar is probably on the bookshelf next to her daughter's hand-imprint arts and crafts project!

So what exactly is stored next to the bones of McLaren?

Thanks again, Michael. I don't know if I fully conveyed how much I enjoyed the visit.

It was an absolutely incredible time. One of the nicest, most rewarding three hours I had in a long time (and that's saying a lot after the two features I screened at the Festival).

Glad to hear it. Don't be such a stranger. We're only a car ride away.