Saturday can be a long day.

The first event yesterday was a 9:00 AM workshop I moderated with Anne Denman, Tom Knott, Dawn Haagland and Fran Krause on Sample Reels. 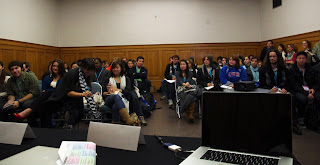 It was geared towards students (most colleges come in for the weekend portion so Saturday morning programming focuses on scholastic presentations).

We had a packed house, I had a lot of fun so I hope everyone else did.  The initial idea was to create a sort of "American Idol" style panel to review people's reels.  That became something a little more ordinary in format.   With this format I hoped to have "recruiters" at studios discuss what they go through when looking for talent, giving artists a better idea of how to position themselves. 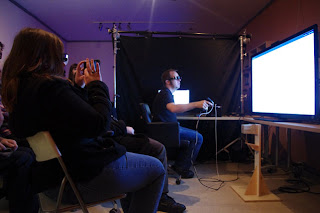 Then looked at the demo of software which creates 3D stereoscopic images.  It was pretty much Flash MX in 3D with even fewer capabilities.  If the 3D fad last for another 4 or 5 years, this technology could quickly become a workplace final.

A few highlights from this program:  Ruth Lingford's "Little Death" a pretty film with voice over interviews discussing orgasms.  I did feel like the picture could live just as well without the soundtrack and the soundtrack might be a little more interesting without the picture.  Both elements were strong but their marriage didn't necessarily make the other stronger.

"In A Pig's Eye" by Atsushi Wada from Tokyo University of the Arts harkened the pre-anime illustration tradition of Japan.  The look is decidedly modern, but the ancient influence makes it particularly interesting. 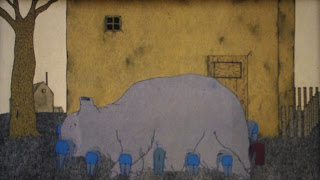 In watching these films, I've learned that its best to go in with an open mind, to want to like them.  It makes week more enjoyable if you're not hating seventy percent of what you see.

The one film in program 4 which I didn't like was "The Tannery", a Scottish production.  It was attractive and well made.  The content -the story of a ghost fox and other woodland spectres - manipulates the audience to feel crummy and never gives any redemptive payoff for feeling so rotten.

Caroline Leaf's Masterclass was beyond standing room when we arrived.  Along with several others, we were turned away.

That gave an hour and half or so before the final competition screening.

"Blockhead", a video for The Music Scene was energetically animated and nicely piece of bravado by Anthony Scheppard.  Folks who love handcrafted animation will get a big kick out of this dynamic film.

It wasn't until the second to last piece when I felt "enough already" and had to close my eyes to make it through.   While there are a couple films that standout as being "good", it hints at a minimum level of quality for the festival set at a reasonably high level.
Posted by roconnor at 3:12 AM