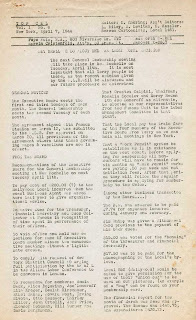 The next General Membership meeting will take place in New Rochelle on Tuesday, April 11th.  It is most important that all Terry people be there, as the recent opinion given by the WLB will be discussed and our future procedure be determined.

The agreement signed with Famous Studios on March 13, was submitted to the WLB for approval on March 30.  All provisions of the agreement other than those governing wages and vacations are now in effect.


FROM THE BOARD
Recommendations of the Executive Board for the General Membership meeting at New Rochelle on Tuesday April 11th.

To pay debt of $200.00 (?) to the Hollywood Local incurred when the coast Business Agent was asked here last year to give organizational advise.

To waive dues for the Treasurer, Financial Secretary and Dues Collector at Famous in recognition of time spent in performance of their offices.

to void office and hold new elections for same if Executive Board member misses two consecutive meetings without a legitimate excuse.

To comply with request of New York District Council #9 urging full participation by the AF of L in the Allied Labor Conference to be convened in London.

That Orestes Calpini, chairman, Rosalie Socolov and Morey Reden with Joe Deneroff as alternate be elected as our representatives from the Famous Unit to the Labor Management Committe in that plant.

That the Local pay the train fare of the four members of the Executive Board from Terry so we can hold all meetings in New York.

That a "Work Permit" system be established as is in existence on the west coast.  Before  applying for membership all non-members will have to remain for six months as "Work Permit" workers paying .50 per week and not initiation fees.  After that period they will follow the regular procedure in applying from membership to the Union.

(Among other business transacted by the board....)

the B. A. was ordered to be paid $7.74 for expenses incurred during January and February.

Jim Whipp was given a Withdrawal Card previous to the payment of his back dues.

$15.00 was voted for the "bonding" of the Treasurer and Financial Secretary.

$17.50 was to be paid for the mimeographing of the Local's bylaws.

Local 852 (Hollywood) would be asked to give permission for the use of their "union bug" to be used on our pictures.  (An example of a "bug" can be found on your membership card.) 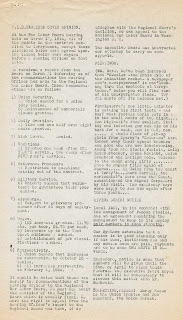 WLB EXAMINER GIVES OPINION
At the War Labor Board hearing held on March 13. 1944, all of the points in the contract submitted to Terrytoons, except those discussed below were argued before a Hearing Officer on that date.

We received a report from the Board on March 31 informing us of the recommendations the Hear Officer had made to the Regional War Labor Board.  These recommendation are as follow:

1) Union Security.
a) Union demand for a union shop denied.
b) Maintenance of membership clause granted.

2) Daily Overtime.
a) Time and one half over eight hours granted.

5) Grievance Procedure
a) Restricted to questions arising out of the contract.

6) Military Service.
a) Union's demand that volunteers be guaranteed their jobs -DENIED.

7) Discharge.
a) Subject to grievance procedure after 60 days of employment.

The Executive Board has instructed our attorney to carry on such appeals.


FLIPPINGS
(Ed. Note.  We've been informed that "Kessler -the Ernie Pyle of the animation racket -a newspaperman's newspaperman" is now "looking thru the knothole at Terrytoons."  Below you will find some of his unexpurgated items.  TOP CEL dusts off its welcome mat.)

Vinciguerra's new little animator is cutting his first tooth -and boy! what footage Carlo puts in -in the small hours of the night.... Don Figlozzi's face swollen.  That big and infected gum had him on his back for a week.  Don is OK now. ..... A whole flock of pin-up girls from Sparky's "Colorama" have thrown away their opaque brushes and pens and are now inbetweening.  Among them are Gloria Feriola, Dolly Knickerbocker, Irene Rowland, Helen Bromback, and Marilyn Cole.  Welcome to the chain gang, girls ........Pete de Angelo flips again at Famous..... Al Geiss from the coast at Terry's ....Herb Sorrell, the cartoonist's hero from the Coast, sensation-ed the Signal Corps-ers by his visit.  The ex-Disney boys were happy to see him again after three years.


GIVING DUE(S) NOTICE
Local 1461, in its contract with the management of Famous Studios, has an agreement requiring the management to keep in its employ only members in good standing.

Our By-Laws determine that a member is in good standing only if his dues, initiation fee and any monies owed are paid.  Payments are to be made ONE MONTH IN ADVANCE.

Therefore, notice is made that members will be given until the 25th of April to clear their records.  The Executive Board hopes that it will be unnecessary to discuss this matter with Mr. Buckwald. 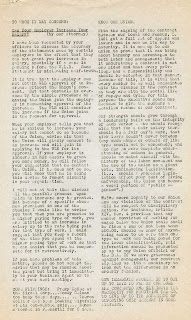 TO WHOM IT MAY CONCERN:
Can Your Employer Increase Your Salary?
(by our Attorney)

I have been requested by your officers to discuss the accuracy of the statements made by certain employers to the effect that they can not grant you increases in salary, specially if a case is pending before the WLB.  Such statement is misleading half-truth.

When your employer tells you that he is anxious to increase your salary but cannot do so because of the Union, advise him that the Union will gladly consent to an increase and will join in applying to the WLB for its approval.  If you employer is sincere in his desire to grant you more money, he will follow your suggestion that he contact the Union.  If he does not do so, you will know that his is using this device to foment disunity in your organization.

I will not at this time time discuss all the possible grounds upon which an increase may be granted.  But because of a specific abuse now prevalent in one of the Studios I would like to advise you that when you are promoted to a higher paying type of work, you are entitled to an increase in salary up to the rate being paid for that type work.  I would suggest that you keep a record of the time you spend at the higher paying type of work so that we can insist you be compensated for it retroactively.

If you have problems of this nature, please do not accept the advice that may be rumored about the plant but bring it immediately to your Business Agent or to me at your next meeting.

MORE FLIPPINGS:   Prexy McKee at the Signal Corp.... Woody Gelman too busy these days.... .. Theron Collier has been looking wistfully at his cob-webbed skis.... Renza marooned in Peekskill for 2 days.

With the signing of the contract between our Local and Famous, L. 1461 got a full set of uppers and lowers and is now on its way to maturity.  It is now up to our union to prove that it can bring about harmony and advantages to both labor and management; that it understands a contract is not one sided and that every privilege has a responsibility and should be accepted in that manner.  Because of this, it is vital that every member be as well acquainted with the clauses in the contract as they are with the social life of Popeye and Oyle (sic).  For this purpose the Executive Board has decided to give the members a detailed resume of our contract.

Our strength should grow through a leadership built on the integrity of each worker- who should recognize that for a fair salary there should be a fair day's work, that sick leave doesn't cover boredom (any such abuse or others of like type should not be condoned); and who for a more complete understanding of unions in general, should acquaint himself with the history of the labor movement and the use of the union as a giant vote, influencing legislation.  (i.e. should a proposed legislation affect your cost of living unfavorably, the Union can become a vocal portion of "public opinion".)

We've sworn loyalty to our Union and any violation of the contract will be subject to disciplinary action.  For instance, Article XIV, Sec. 4 provides that any member convicted of working for wages below the Union scale shall be  fined a sum of not less than $50.00.  Should we know of anyone being asked to do more than one type of work and being paid for the lower classification, said information should be presented by us to any Union official or the B.A.  If we have grievances against management, our contract supplies us with a machinery to iron out the differences in an orderly fashion.

OUR IMMEDIATE PROBLEM IS TO GET UP TO DATE SO FAR AS OUR DUES ARE CONCERNED AND ELIMINATE THE NECESSITY FOR REQUIRING THE CO. TO LIVE UP TO ITS AGREEMENT OF EMPLOYING ONLY MEMBERS IN GOOD STANDING.
Posted by roconnor at 5:18 AM