One more week in the saga of Terrytoons. It's an interesting study in the history of our industry. 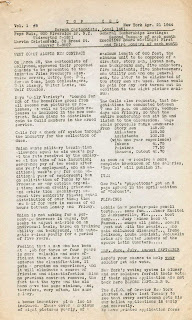 Says "Daily Variety": "Demand for 20% of the boxoffice gross from all second run pictures or reissues, as well as television releases is included in the new contract.  Union plans to distribute coin to Guild members in the armed service.

Calls for a check off system through the industry for the collection of dues.

Union wants military termination allowance equal to six week's pay at the rate received by the employee at the time of his induction; severance pay of two weeks after one year's employment, and an additional week's pay for each additional year of employment ban on solicitation of funds by the Producer or any outside organization; screen credit; grievance and arbitration machinery; accumulative seniority rights; equal distribution of over time; time and half for work in excess of 40 hours between Monday and Friday.

Union is not asking for percentage increase in wages, but seeks to adjust salaries on an individual basis, based on training, ability and background, with automatic raises yearly for a period of five years.

Feeling that a man who has been at a gob for three or four ears is more valuable and more efficient than a man who has just entered the classification, it puts a premium on experience, and it will eliminate a source of friction and dissatisfaction which no previous contract removed, the fact that the tyro and the old hand have the same minimum, and, therefore, very often, the same salary.

A bonus incentive plan also is included.  These cover a maximum of eight eight pictures yearly, of a
maximum length of 600 feet, the minimum unit to be composed of a director , story man, layout man, one background man, five animators, five assistants, five inbetweeners, one utility man and one general man, the later to be eliminated if two story men are used.  Bonus would be paid for any work turned out in addition to the eight picture minimum.

The Guild also requests, that negotiations be conducted between 7 and 10 p.m. on Mondays, Wednesdays and Fridays, so that the entire membership can sit in and listen to the discussion.  Wage scale proposals range downwards

As soon as we receive a more complete breakdown of the salaries, "Top Cel" will publish it.


ITEM
Geo Pal's "puppetoons" got an 8 page spread in the April edition of "Coronet".


May, June, July, August SEPTEMBER
Here's your chance to help your soldier get his vote.

New York's voting system is clumsy and our soldiers forfeit their votes if their signed application are not back here BEFORE SEPTEMBER 9.

The CIO of Greater New York started a drive last Tuesday to see that every serviceman gets his war ballot applications in early and correctly.

We have printed application forms 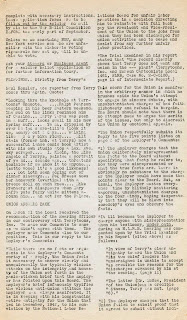 complete with necessary instructions.  these application forms are to be filled out by the soldier and mailed by him to the War Ballot Commission BEFORE the early part of September.

Unless we do something NOW, many New York servicemen who are unfamiliar with the elaborate voting rigamarole now set up, will be unable to vote.

Ask your Steward or Business Agent for a soldier application or for further information today.

"Looking through the knothole at Terrytoons" Unquote.  ....Ralph Pearson weeping in his beer Eastern weekend.  The mud on the links reminded him of Cassino... Marty Taras was seen in a huff... looks swell in his new Spring huff.... Ye Ed, crippled by over heated sacro-illiac (look it up, honey) out days.... walking like a 6 day bike rider.... Milt Stein (former inb. at Terrys) now a successful lance comic book artist with his own studio atop a Lex. Ave. sky scraper.... I. Klein, the Mike Angelo of Terrys, painted a portrait of ye Ed... decade ago... threatens homicide if we show it to anyone... (sotto voce) it's a good likeness! .... Dot Loth seen edging out of dinner sideways... Peg Breese does her homework (overtime) with a breeze doll on each knee.... Mike Prendergast disappears when Mary Zaffo puts fuzzy white mittens around him... an act for the Palace.


UNION ANSWERS BACK
On March 31 the Local received the recommendation of the Hearing Officer in our controversy with Terrytoons, Inc.  We made our Comments to same as we didn't agree with them.  The Employer made Comments also to our position.  This is our reply to the Employer's Comments:


"While there are no facts or arguments i the Employer's Comments worthy of  reply, the Union feels it necessary to answer clearly and unequivocally the typically vicious attacks on the integrity and honesty of the Union set forth in the panic-stricken brief that the Employer has foisted upon this Board.  the Employer's brief infamously typifies the vicious anti-union attitude the Employer has always manifested.  It is in keeping with his longstanding active antipathy for the Union that led in November 1943, to his conviction by the National Labor Relations Board for unfair labor practices in a decision directing him to reinstate with full back pay the President and Vice President of the Union to the jobs from which they had been discharged for union activities and to cease and desist from any further unfair labor practices.

"The Trial Examiner in his report stated that 'the record clearly shows that Terry does not want any union in the --- plant' (Terrytoons, Inc. and Screen Cartoonists Local 1461, NLRB, Case No. 2-C-5108, page 11 of Intermediate Report.)

This scorn for the Union is manifest in the arbitrary manner in which he brushes aside the Union's attempt to engage in sincere debate, with unsubstantiated charges of bad faith dishonesty and refusal to bargain.  The Board should note that there is no attempt made to argue the merits of the issues, but only to discredit the Union by emotional appeals.

The Union respectfully submits its Reply to the five points listed on page 3 of the Employer's Comments:

1) The Employer charges that the Union deliberately misrepresented the facts to the Board without specifying what facts he refers to, how they were misrepresented or what the true facts are.  There is obviously no substance to the charge or the Employer would have made these points clear to the Board.  But, as usual, the Employer wastes everyones time by blithely scattering vaporous, unsubstantiated charges to the four winds, hoping desperately that they will be blown into somebody's eyes and obscure the facts.

It ill becomes the Employer to charge anyone with misrepresentation when his testimony, under oath, during an NLRB hearing was commented upon by the Trial Examiner in his Report (cited above) as follows:


In view of Terry's clear antipathy toward the Union and its two chief leaders the undersigned is unable to accept as credible the reasons for the discharges advanced by him at the hearing. (page 11)

The latter (Mr. McKee, President of the Union) was a credible witness, Terry was not. (page 6) 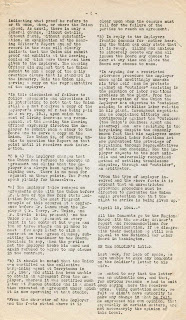 what proof he refers to or to whom, when, or where the Union agreed.  As usual, there is only a general charge, without details, without facts, without substantiation.  An examination of the Hearing Officer's Report and of the record in the case will clearly indicate that the Union did submit proof and exhibits at the Hearing, copies of which were there and then given to the Employer.  The Hearing Officer did suggest that the Union submit to him a copy of the daily overtime clause that is standard in the industry.  This the Union did, serving a copy on the representative of the Employer.

In this discussion of failure to follow agreements and directions it is interesting to note that the Union still has not received a copy of the Employer's study of rates being paid in January 1941, upon which the cost of living increase was recommended.  At the Hearing the Hearing Officer expressly directed the Employer to submit such a study to the Board and to serve a copy on the Union.  The Union is, of course, unable to question the Report on that point until it receives such information.

3 & 4)  The Employer charges that the Union has refused to execute an agreement and claims that the Employer has always been agreeable to signing one.  There is no need for argument on these points.  The Facts speak plainly for themselves.

a) The Employer twice reneged on agreements made with the Union before Mr. Lanou of the New York State Mediation Board.  The most flagrant example of this occurred at a conference before Mr. Lanou when the Employer (Mr. Terry, Mr. Weiss, and Mr. Kerwin being present) and the Union came to agreement on every point in the contract but wages and two or three others and planned to meet few days later to sign a contract on the agreed clauses, submitting the remainder to the Board.  Needless to say, when the parties met the Employer broke his word and again refused to agree to any clause in the contract.

b) It should be noted that the Union was certified as the collective bargaining agent at Terrytoons in May, 1943, and still has been unable to obtain an agreement from the employer, whereas it was certified much later at Famous Studios and in a short time executed an agreement under which it is now operating at that studio.

From the character of the Employer and the facts stated above it is clear upon whom the censure must fall for the failure of the parties to reach an agreement.

In arguing for a restricted grievance procedure the Employer once again unwittingly unmasks his true self when he protests against an "outsider" assisting in the solution of labor relations problems in the plant.  From the very inception of the Union the Employer has objected to "outsiders" helping to stabilize labor relations in his plant.  Throughout negotiation he complained bitterly and continuously against "Outsiders" (the Union's Business Agent and Attorney) who were assisting in the bargaining despite the commonly known fact that his employees under the National Labor Relations Act are guaranteed the privilege of bargaining through representatives of their own choosing.  Now the Employer objects to the most amicable and universally recognized method of settling troublesome disputes, through an "outsider", an arbitrator.

From the type of Employer involved and the above facts it is evident that an unrestricted grievance procedure must be directed to guarantee the Union ample protection now that the right to strike is being given up.

All the Comments go to the Regional Board with the Hearing Officer's report and recommendations for their consideration.  If we disagree with their decision we still can appeal to the National War Labor Board in Washington.


ON THE SOLDIER'S LETTER
Last week, for lack of space, we were unable to make any comments on the Soldier's letter to his wife.
We wanted to say that the letter was an authentic one, and that, for obvious reasons we had to omit even saying where the receiver works.  Using quotation marks, we felt we didn't have authority to make any changes in what he felt.  He expressed his own opinion, that especially in certain matters, are not necessarily the opinion of this Local.
Posted by roconnor at 6:05 AM