An unexpected detour kept us from arriving for any of TAC (Television Animation Conference) events.

They seemed to be mostly Canada-centric anyway.  The downside, all of the TAC booklets had been distributed but I've since learned more have become available.
NOTE: as long as my phone has charge I'll be twittering the Festival twitter.com/asteriskpix
One thing you may not have heard about the city of Ottawa is that it's seemingly always under construction in the same places.

On to the shows.
First screening was Sylvain Chomet's much anticipated "The Illusionist".  It's not a stretch to say that it features some of the most articulate, realistic animation of the human to have graced the screen.   Prior to the screening I had heard whisperings from several quarters that the picture was lacking in the story department.  I wouldn't necessarily agree with that -the characters, however, are questionable.

Later in film, we're left to question if that's a rabbit in his pocket
Americans, at least, might think the worst when it comes to old men "adopting" and doting on stray teenaged girls.  This whole set up -and the girl's generally unsympathetic character -make for uncomfortable viewing.
The short film program started with politics.

Award winning "Logorama"
Academy Award winner "Logorama" kicked it off.  There's not much to say for this.   It would be generous to say this was a film about consumerism and not just "too clever by half."
Matching it with Simon Robson's "Coalition of the Willing" gives "Logorama" that political edge which makes it tolerable.  I spent the day with Simon several years back, he's a great guy and terrifically gifted. This film is a bit heavy on words but the visuals carry it.

still from "Coalition of the Willing"
The theme of the program winds up taking from the style "Coalition of the Willing" more than the content.  Much of the rest of the show is comprised of mixed media or 2 1/2D hybrids.
The two following films are the with political overtones.  Dustin Grella's "Prayers for Peace", a student film from SVA, recounts the filmmaker's experience with his brother's death in Iraq and Steve Woloshen's "Playtime" is a direct on film romp.  "Playtime" has some violent imagery amidst the snappy soundtrack and bright visuals and serves as a segueway out of the overtly political films. 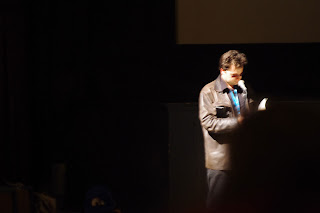 Festival Director Chris Robinson giving his opening "speech"
Most notable amongst the rest of the program are "Hand Soap" a student film from Japan by Kei Oyama.  It's a dark (visually), difficult piece that has some striking imagery and interesting draughtsmanship.
"This is Love" by Lei Lei from China is a goofy piece of fluff with nice design.  As a viewer, it raises some questions about the cultural nature of film.  Is the absurdly simply because it's foreign?  The crude design and loopy storytelling may be perfectly standard in the community in which is created, but to an American it's just shy of bizarre.
Posted by roconnor at 12:10 AM

Many thanks for this good wrap up of the Festival. Those of us who couldn't make it watch through your eyes.