Friday morning is typically a lull in Festival activities.  This Friday Maral Mohammedian from the NFB interviewed Steven Woloshen about his work and his process.

He's recently published "Recipes for Reconstruction" -a handsome sort of cookbook for making cameraless  films.  Each of the nine chapters gives the "recipe" for how he made a film on the accompanying DVD. 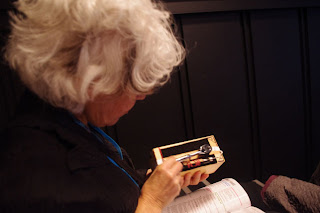 Caroline Leaf examines the scratch device
The 90 minute conversation was captivating for the first hour.  The filmmaker detailed his many techniques, including burying his films to let insects eat into it and decay set in and passed around a homemade box for doing scratch films he used while working as a driver on feature films.

In some ways the Festival centers on the Friday afternoon picnic.  This year, presumably since the dates have slid fairly late on the calendar, it was held indoors.  The location may have been physically warmer but the atmosphere was significantly colder than years passed. The restaurant's architecture dispelled the informal looseness that typically leads to forced socializing.  I did get to catch up with the great Tom Warburton who's excited about working on Fish Hooks for Disney and having a great time there.

I found Brent Green's "Gravity Was Everywhere Back Then" to be extraordinarily moving.  Even stronger than Phil Mulloy's feature from the previous day.  It's pixelated, oddly some students were debating the "animationy-ness" of the technique. 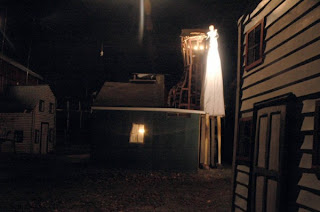 "Gravity Was Everywhere Back Then" hit me hard
A few people (the aforementioned Maral, one) vehemently disliked the picture.  It's kind of the exact opposite of something like Toy Story 3, so I can understand the depth of the dislike.

To me, it was captivating from beginning to end.  A discussion of  humanity and sadness and trying, trying to do whatever you can to save the person you love.  Festival director Chris Robinson credited Suzan Pitt for recommending the film to him.  Yet another thing to be thankful for to her.

While the highlight of the night may have been Chris Robinson's uncensored "discussion" with Amid Amidi about the shorts program (Amid didn't like it), the showcase itself was fairly solid.

There was a music video which I hated and some middling films but the two standouts -David OReilly's "The External World" and Kelsey Stark's "LGFUAD" along with a fun/energetic exquisite corpse high school film from CSSSA would alone make any program special. 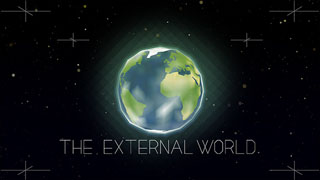 If there were laws against genius, David OReilly would be spending a life behind bars
I've already written about "LGFUAD", and as much as I'd like to write about "The External World" I'm afraid I don't have it all together to put words to it.  I do think it's exceedingly unfair to the rest of us that the filmmaker is so preternaturally talented.  I'm looking forward to screening this film several more times, like a deciphering a poem and digesting all its layered meanings.
Posted by roconnor at 1:50 AM