Sunday, the final day, can be slow.

Still, the 9:00 AM "meet the filmmakers" sessions are typically overpopulated with filmmakers after the 5 competition screenings (2 shorts, 2 children films, 1 feature) the day before.

This leads to unfortunately cumbersome sessions.  The NFB, who sponsors these terrific events, should consider breaking these up by screening on the final day of the festival.  As mentioned, there's not too much else happening -schedule it in two parts one from 9 to 10, another from 10 to 11.  This would give the audience an opportunity to discuss the films in a little more depth than fitting two dozen filmmakers into an hour.

We then had a nice brunch with Dan Sarto from awn.com before taking a 4 hour break before a screening of films from Winnipeg.  Winnipeg animation has a great punk feel, they also tend to keep them short.  Interesting to see Richard Condie as a musician on many.  The music was uniformly great throughout the show.

Then, on to the awards. 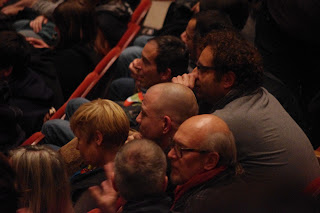 Here's the list.  We twittered them as they were announced.  Earlier in the day Festival Director Chris Robinson approached and said "I know who the grand prize winner is."  I replied, "So do I do.  It's David OReilly."   There was clearly no other choice.  It's a great film.

Actually, it's hard to argue with any of the choices.  I think the jury did a great job with the selections.  While I preferred Brent Green's feature to Phil Mulloy's.  Mulloy's is equally genius and absolutely deserving of the award.
Posted by roconnor at 1:05 AM