I looked at several Fred Mogubgub paintings a few weekends ago.

He turned from animation to painting in the late 1970s.  The earliest dated painting I have noted is from 1980.

While some of the work is quick and rough, it's all meditative.  Most move very far from his 1960s films -in form at least.  The connection is not overt, not obvious but the more you live with these paintings the more their connection to that vibrancy becomes evident.

The melancholy of his film "Unknown Reason" from the early '70s carries through in much of the work, its ethereal spirituality even more.

Through this a pop sensibility remains.  Many of his canvases he "defaced" with broad strokes of color overtop of intricately detailed portraits.

Liesje Kraai picked up this piece. 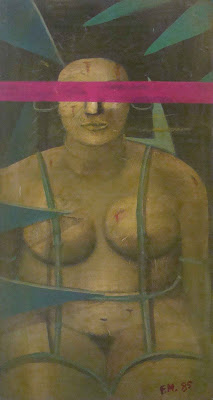 This was after his work on "The Soldier's Tale" and a few short years before his death.
Posted by roconnor at 7:00 AM

What's the latest painting you know of?