This is the last film we did for HBO at The Ink Tank. 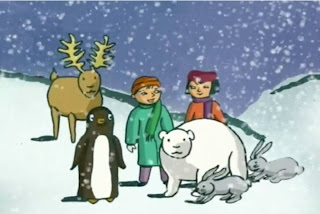 Santiago Cohen is responsible this. As always his designs are stellar, this time matched by a loving soundtrack by Macy Gray.

Santiago also did a lot of the animation. I was in a foul mood the whole production because I felt HBO was screwing the studio. Funny, today, if the situation were the same at my own company I wouldn't mind. I also like to think that such a situation wouldn't arise.

In addition to El San, I did several scenes and a lot of inbetweening although I can't remember exactly what -none of it looks the right kind of amateur to be me work. I'm pretty sure Scott Dodson helped on this animation, and I think Casey Saffron was an assistant at the studio around this time. I'm certain that Alex Reshanov did the compositing and a lot of the art production. I also suspect Valerie Cardon did the inking, it looks good.

I'm surprised how well the show holds up. I just watched again a couple of days ago. Nice work by all, though Maciek's Have Yourself A Merry Little Christmas is incredible.

The animated segments are good. The "cute kid" stuff drives me nuts, although they are well done.

At the time I felt cut out from working with Maciek on his films. We had worked together on all of the previous segments. This bothered me. I'm long over it since I realized its best to do as little actual work as possible.

His segment is pure graphic/animation genius (with a big assist from the soundtrack). There's no reason it should be such and emotional little piece. Through his genius of filmmaking, Maciek makes it great.