Guinness Would Have Called This

The gayest cartoon on Earth.  And we wanted to make it.

I've written before about Maurice Vellekoop and how we love his illustration.  We've developed a few projects with him, nothing has materialized yet.

A few years ago Logo (the gay oriented cable network) invited us to pitch show ideas.  We began by reworking a great concept we had developed for a general audience.

Maurice had some new characters and created some -as usual -beautiful pieces of art for it. 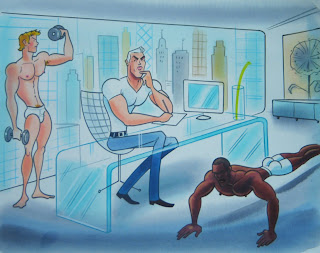 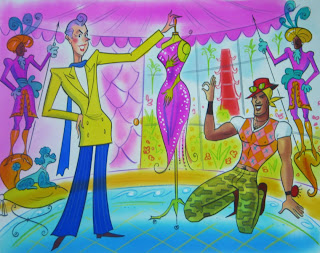 After a lot of initial excited from the network, they claimed poverty.  While we felt this was the sort of production a channel could build its identity around (much like Comedy Central did with South Park, then briefly Chappelle and now The Daily Show) it may have been a little too out of the ordinary. Yes, that is Liza Minnelli.
Posted by roconnor at 5:46 AM