I meant to post this last week, but forgot.

There were a few other patterns in the set, Mr. Natural was one.  Even Fritz the Cat, believe it or not.  This was my favorite so it's gone unused for over ten years. 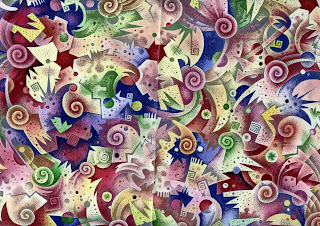 In the "Brush Room" at The Ink Tank (short for "airbrush room") there was a sink and a little kitchenette  area.  Posted here was a drawing of a man pointing skyward in exclamation, a word balloon saying "Keep This Place Clean!"

Washing dishes with R. O. Blechman, I once said "That looks like a Crumb drawing."  "It is," he replied.

He then told me how he had long admired his work and befriending the cartoonist in the early 60s -well before "Weirdo" and the Underground Comix movement.

After Crumb moved to San Francisco, he even hosted Blechman for a few days on a visit.  A pairing I find ceaselessly comical.

In any event, R. O. repaid the favor having the Crumbs to dinner in New York.   Just before dining, R. O. stepped into the dining room, lifted his finger and proclaimed "Dinner is served."  A few days later he received the drawing, a portrait of sorts, as thanks for his hospitality.

You convinced me. I bought a copy of this wrapping paper on ebay. I can't wait to get a look at it all.
Thanks for pointing me in the right direction.