At Least It's Not On Nitrate

A few years back I helped to convince a friend to move back the States from Europe.

"You're an artist. There may be easy grant money in the EU, but in 100 years, 50 years, will anybody care about the art that was made there?" Specialists maybe. But history only cares about the winners. Right now the United States is on top. Even if the cultural paradigm shifts, the children of the future will study writers from "The New Yorker" and catalogs from the Whitney Biennial in the same way we look at Sophocles and the Venus de Milo.

Even in our own little subculture of animation, work goes forgotten just a few decades later. The marquee names of the dominant hegemony linger (many NFB animators, Hubley, Williams, Bakshi) whilst "provincial" artists without press agents fade away.

Two pages of stills from 1980's animafilm issue 7 (the quarterly journal of ASIFA, then published in a Babelesque four tongues) caught my attention while I was waiting out a render. 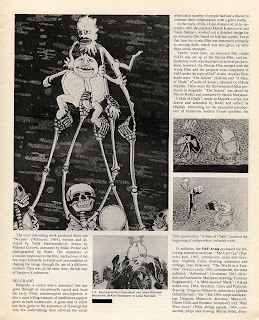 Here's the brief paragraph, written by Ranko Munitic, on their work.

Koni Steinbaher and Janez Marinsek first won their fame as amateur film makers, the authors of "The Speaker" (1970), "The Fig Leaf" (Figovlist, 1971); Superman (1972), "Coexistence" and "Macvirje" (Koesistenca i Mocvirje, 1973). Those presented interesting experiments with various animating techniques and material, those were also works meaningful for Yugoslav cinematography as a whole. Since 1973, Steinbaher and Marinsek have been doing professional work for Viba-Film. Yet "Telematter" (Telematerija, 1973), "Student" (Student, 1974), "Overtaking" (Preticanje, 1975) and "Mocvirje" (1976) did not equal their amateur films, either from the viewpoint of originality or structural harmony.


Of all non-AngloAmerican animation movements, Zagreb is probably the best known. In large part due to the strong influence of American graphics on their animation. Still, many artists with several works to their name go unknown. A fate the ultimately waits for us all. 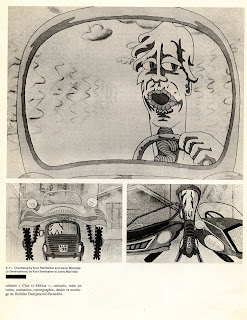 I suppose I could blame ASIFA International for failing to uphold the legacy of its past members, or the animation writers who would rather prattle about well-trod subjects like "The Nine Old Men" or investigate the many phases Walt Disney's moustache, or even the artists themselves for neglecting to keep their flame burning.

But really, animators don't care.   They'd rather pass on the memories of public figures, whether that's Viacom's Nickelodeon Studios or Ralph Bakshi or Blue Sky than connect with the work of artists hardly a generation removed.

Evidence of this was in the attendance at the UPA program on Monday. Not too many animation people in the house, certainly very few younger people. Too bad.