Arnold Stang As A Bug

Many, many years ago we did a sex education video with Whoopi Goldberg for Linda Ellerbee's Lucky Duck Productions.

It was a 30 minute film, very straightforward and explicit. 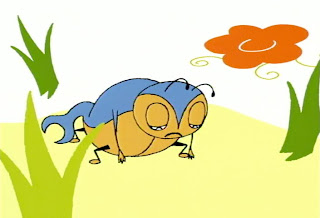 Phil Marden designed and storyboarded the whole thing. It was animated in Poland by Lukafilm. I was opposed to sending it overseas, and though the animators did a good job the film clearly suffered. The acting doesn't work in many places.


That shortcoming was tempered by Phil's terrific styling as well as a strong voice track.

This part was actually written with Arnold Stang in mind. One great thing about animated films -it's surprisingly easy to get the actors you want to voice the parts. Mr. Stang just took two phone calls. One to SAG to get his number, and one to him (if I remember correctly he did not use an agent).

As expected he was perfect. A great professional and a great pleasure to work with.
Posted by roconnor at 3:34 AM