This evening R. O. Blechman and R. Sikoryak will be discussing their new books at The Strand.

I haven't seen R. O.'s yet, but its been in the works for a long time and I'm greatly looking forward to it. ORDER HERE We spoke briefly on Wednesday, he's still fiddling with the presentation -although this time his publisher hasn't yet shown him the slides. 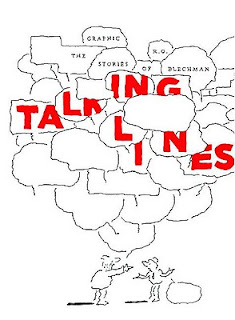 As he told me this, I was reminded of his retrospective in Ottawa in 2002. We had planned it out weeks ahead -I had lobbied to include more "classic" work: Sesame Street films, "Abraham & Isaac" (with a great soundtrack by Pete Seeger), "The Emperor's New Armor", etc. R. O. did concede a few, ultimately showing "The Medical Dilemma" a 4:00 film for CBS which showcased some top notch Ed Smith animation and agreeing to show his 4:00 opening to the never produced "Golden Ass" (also featuring incredible work INCREDIBLE work by Ed Smith). I don't remember how the program finally played out, I do remember sitting in the back of the theater when Chris Robinson approached incredulous that R. O. was in the projection booth re-arranging the show moments before curtain.

I'll post some of the stuff Sikoryak has helped us out on in the next few days.
Posted by roconnor at 12:58 AM