Discipline Is Necessary Before One Can Really Be Loose

For several years in the 1980s and early 90s, Tissa David gave regular classes at The Ink Tank.
Sometime around 1999 I uncovered someone's notes from these sessions. From the looks of it, each class was dedicated to a specific task, like the 4 frame run shown below. 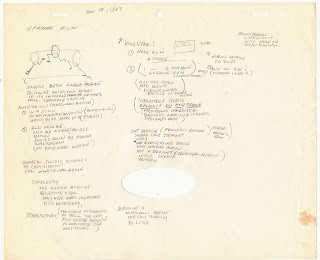 Click on the image for the lesson of June 18, 1987.
I've been told by a few people that artists would often take these classes more seriously than their paying jobs. An animator might be a little late or sloppy or even turn down freelance work to ensure that Tissa's homework was done properly.
R. O. Blechman told me he was inspired to needle Tissa into giving the classes after visiting the Richard Williams' studio in London and seeing Art Babbit and Ken Harris give talks. (On the flip side, Richard Williams told me they nearly came to blows -respectfully -over Tissa's services.)
Tissa's ability to "dance" is unparalleled. "Dance is always a walk. Body is always in balance even when its falling.
Notes from June 25, 1987 on balance and exaggeration. And "Personality of the character will come with drawing." 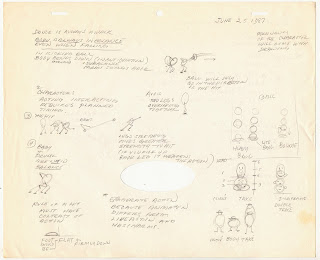 Here's the backside of those notes. 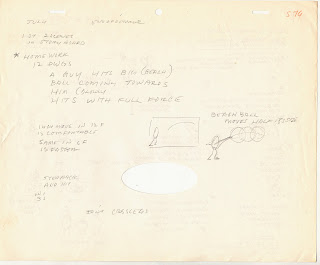 Homework: a beach ball moves half its size.
I have a few dozen of these note pages. We'll be posting them sporadically in the upcoming weeks.
Posted by roconnor at 12:01 AM

Thanks for posting this, Richard. I had the honor of being in these classes; I remember that specific lesson.

I also remember Tissa taking me aside early on and telling me: "John, your films are very droll, very funny. But you cannot animate. Your animation is... well, there is no animation. Things move here, things move there, they don't animate..." It took me a while to get over that, and to really see what Tissa was getting at, but once I worked thru it I learned more from that weekly after hours class than from work, school or anything else I've done, and I'm eternally grateful.

This was from back in the days when all our animation was done on paper, and production would often involve cutting out animation drawings and gluing them onto cells; I suspect that the paper Tissa wrote on was left over from a bit of production art (the ovals cut out of the center).