I started reading on the subway afterwards.  So far, its pretty good.  When I finish, maybe I'll post some thoughts. 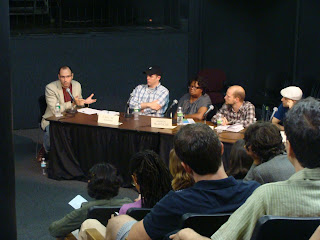 Someone asked if the panel envisoned an animated version of "The Sopranos" or "Mad Men" (*note: I've never seen either, but I get the point).  The panel didn't really.

What makes those shows -or "The X-Files", "Rome", "Six Feet Under" and others of pedigree -special?  They tell sophisticated stories which happen over course of months and years.

The American TV system doesn't have a place for this.  You can be either a ribald comedy or a kiddie show.  There's a small niche for action, but not much.

Japanese animation has had more sophisticated narrative structures since the 70s.  "Star Blazers" being a classic example. 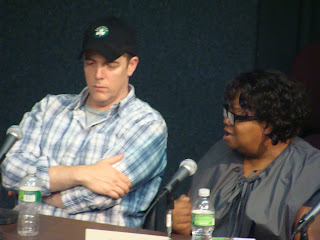 Janice Burgess: I'm not an artist, I work for a living.

Carl W. Adams: You wouldn't get a great writer then somebody who can't animate or draw very well... 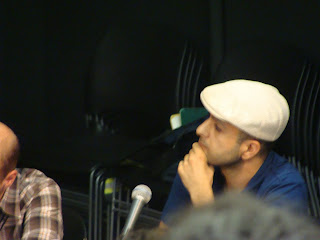 Amid Amidi, still refusing to take his hat off indoors

I don't make it too many ASIFA events.  It's interesting to see the turnout and hear the questions that students have.
It seems like they have a great concern for business, and were able to articulate some pretty good questions.
Posted by roconnor at 5:40 AM

I got the point of the question that you reference with the MadMen example. But, the question was phrased as "Don't you think there should be more variety on TV animation?" so there wasn't much of a question to answer. But I did answer it by saying, "You can make that happen. Make the shows that you want to be watching." I think that was the appropriate answer. Obviously we all agree that it would be great to have more variety and even more sophisticated plot lines, and show structures, etc...

Carl Adams and Janice Burgess had a lot of good points and wisdom to share, but you only include some fumbles here...

Janice's main point over the night was to be savvy, to find out where to best take your idea, and to consider your audience and why the idea would work for them. The point being that it will make a more direct path for your project to find success.

Janice and Carl did have good points. And it was a good panel, I would recommend it.

Those two I just thought were really funny.

I especially agree with Carl's considering the state of design and animation in TV production. I find a lot of well written shows destroyed by terrible art.

Regarding "Mad Men", can an artist or producer really make that happen in the US? It would involve not only a receptive network, but a cultural shift and -as Carl said -a show running writer of a pedigree TV animation hasn't seen. The question in itself has a lot to unwrap in it.

Thanks for the panel, it was a lot of fun and I think people -especially all of the students in the audience -should have gotten a lot from it.