Body Goes Forward Before The Leg Picks Up

Our well-laid plan of publishing the notes from Tissa's class in sequence has already run afoul.

I've just learned that May 28 occurs prior to June 18, so there was at least one set of notes that should have preceded our last post. 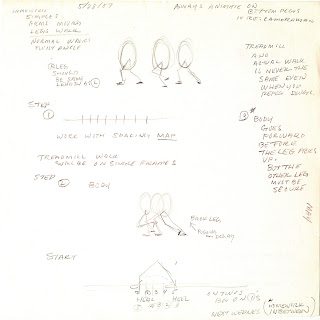 Step 1 of a walk. Work with a spacing map. Of course! Something they never teach in school -figure it out before you draw it.

Which brings me to my next rant as well as the next set of notes -the exposure sheet.

Maybe we do things strangely, so maybe it's just us. We've worked with young graduates from just about every major art/animation school on the East Coast. To a person we've always had to train them in basic animation practice and nomenclature.

Like zooming on a match cut -as shown in these notes. Or how to mark a cross dissolve. Or a cut. Or even how to use exposure sheets. 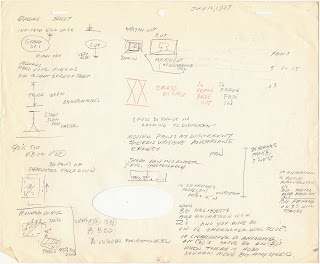 Of course, I learned all of this on the job too. But I studied history and theater- still I could tell the difference between a Black Jacobin and The Emperor Jones.

Maybe this is all esoteric nomenclature, and the fact that I learned it this way makes me the one who's crazy.
Posted by roconnor at 5:28 AM

Wow, thanks for posting these. These are awesome gems. I'll have to bookmark this blog.