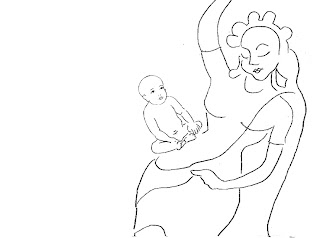 After honing in on the drawing style David Grubin wanted for his Buddha film, we decided to do a little animation test.

Marina Dominis helped us come up with this style and Brian animated this little test. As I said we were very attracted to the project, so we did everything we could to secure it.

This idea is still in the film, but the execution is very different. And I think this test is pretty good for two days work. It's a simple example of the approach we would take to the animation.

On occasion we'll create a little piece of animation for a commercial pitch (I'm referring to all work-for-hire as "commercial"). I don't like to do it, because it's an expensive time consuming process to do properly. In this case, we felt that these 40 or so drawings would ultimately be more economical than not doing them.

Tomorrow I'll post a pitch test which I wasn't keen on doing.
Posted by roconnor at 5:14 AM