Don't know who left these notes behind at The Ink Tank, but they lost a treasure. Odd, too, since they were so well kept.

Maybe they were J. J.'s. I found them in the big room where he would have kept a desk and I do recall reading some of his job notes that were in an all caps hand.

Today's notes have one of animation's eternal truisms that we often break -"Mass should retain same area: even in distortion". In "illusion of life" animation, this is always true. But not all animation is about that.

Also a good note I had never thought of. When testing a run (or a walk, for that matter) -shoot it on 6s or 4s. The action slows down and you see if the movement is correct. 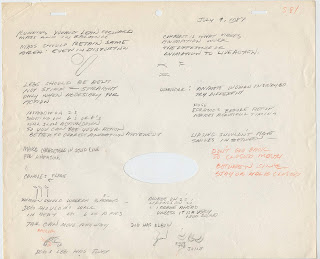 I assume this was for a woman walking a dog. Enlarge the scan for the sketches and more on the dog.
Posted by roconnor at 7:19 AM

That's very interesting note about how to test a walk or run. It's like flipping it. Thanks for posting this

The next entry in this series is actually about how animation is just re-discovering things that other people have already figured out.

That's true of everything else in life too.