The first thing I consider when discuss film and other arts: do I like it?

That's the starting point. Plenty of questions follow, leading with "why?" or "why not?"

On "Cloudy With A Chance Of Meatballs", the immediate answer to "why?" is because I have a personal connection. The book was an important part of my early development, shared time with my father and mother. Further, I've had the great fortune of working with Ron Barrett, the illustrator, and know him as a generous and gifted person who deserves enormous success. 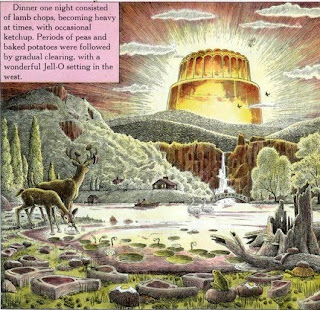 So I want the movie to do well. That's a start.

Past that personal connection, there's the material itself. Art resonates either intellectually or emotionally. Emotionally is easier. Intellectually is more rewarding. For me, the picture appeals to both.

Without going into the character development which makes "Cloudy With A Chance Of Meatballs", the film, connect on an emotional level -I'd like to make a note on the character design and animation. 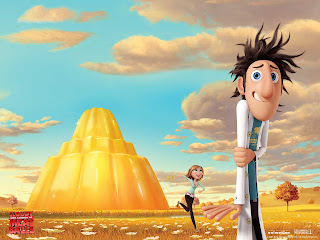 Pixar is the gold standard for 3D character animation, yet I've always felt their films lacked something in the animation department. Like "the illusion of life" transformed from one lesson amongst many to a universal obsession. The animation in "Cloudy With A Chance Of Meatballs" may not have the sheen of "Toy Story 2" or "Up" but it has something greater -character.

There's a great shot of the main character running down a hallway. His limbs flail and barely touch the ground. He moves like a muppet, like a well controlled marionette. To me, it's very satisfying animation. Without mimicking reality, without aping the broad stage acting of later Disney productions -the animation team did something interesting and original that works.

The design (like all big budget design these days) is 1950s inspired. It's become a thoroughly tired cliché in animation. The puppet-like nature of the characters and the richness of the background design make them work. They become cartoons, in a good sense.

The end titles illustrate the visual bankruptcy that "neo-retro" has become. The deftness and light of the CG creations is vulgar and cheap in the 2D end sequence. One less "D" but completely overwrought.
Posted by roconnor at 5:42 AM

Email ThisBlogThis!Share to TwitterShare to FacebookShare to Pinterest
Labels: film

It's funny but that was one of the main things that kept popping into my head the whole time: they all looked like Muppets! I mean, the dad was a direct descendant of the Muppet Newscaster with a little bit of Sam the Eagle thrown in (eye reveal?).

Even though I think they're very "muppet-y", stylistically they represent a more "animated" approach than the Pixar/"Illusion of Life" model.