End of the Hill

In some ways, "King of the Hill"'s success comes from the process of animation.

The television "sitcom" has devolved into a lowly, despicable form. Cliché writing and a glorification of crassness as evidenced in the proliferation of the "vulgaratti" on the airwaves and in the newspapers. Impossibly good looking women suffering the foibles of oafish husbands who can't fight back the laughter from their own jokes. 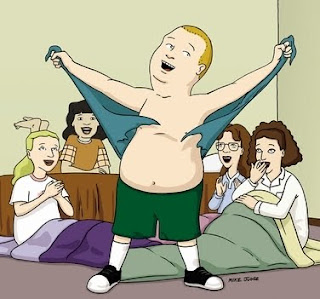 The voice performances of "King of the Hill" were pitch-perfect. The acting, instead of being handicapped by low quality Korean contractors, became more alive through their understatement.

Beyond that, this was a show written with care. While it may have begun as a sort of lampoon of suburban Texas everyman Hank Hill the stories quickly evolved into a sympathetic well rounded character. His wife Peggy displayed the faults and peculiarities of a flesh and bones mother.

Fittingly, last night's final two episodes focused on the father/son relationship between Hank and Bobby. Being human, at its core, is about connecting with others. "King of the Hill" created cartoon characters that were more real, more human than just about any other comedy on television.
Posted by roconnor at 3:08 AM