Not much for calendar turning, as things still progress regardless of the last digit of the date.  The end of the year means one thing to me -time to prepare taxes and send out all the 1040s and W2s and spend hours doing what should've been done months ago. 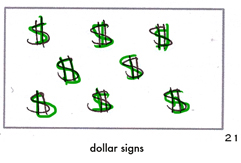 So it gives opportunity to reflect on business.

We're still here, that's a start.  We did about half the business we wanted to in 2010 but I've always had great expectations.

We only logged 15 jobs in the calender year (we'd like to engage a new contract every two weeks).  That's a bit misleading, since one contract was for 6 films and another for 4.  The shortest was for :02 (commercial -good budget!), the longest single film was a 6 minute motion graphics piece.   All told, about an hour's worth of material was contracted with Asterisk this year.  Screentime-wise, about 10 minutes was actual animation, 30 minutes live action/editorial and about 20 minute worth of motion graphics.

Most people would call "animation" what we consider to be motion graphics.

Our work for David Grubin's "The Buddha" broadcast in March.  This was completed in 2009.

We also finished 5 productions which contracted in 2009 (two are still lingering -we'll finish I promise!  Actually 3 are still out there, I forgot about the series of ads for Infor which still have some spots left on the initial deal).

Three contracts will finish the first week of January.

And one big cat. 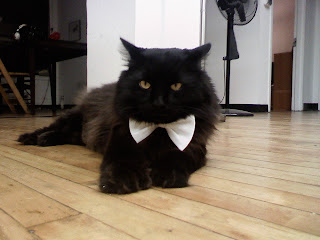 66% (10) of our contracts have been for non-fiction films.  Of these, two are theatrical, one web, one international broadcast, one US cable, the rest US Public Television.

No particularly weird projects this year, the rest have been fairly typical commercial or industrial contracts.

33% (5) contracts were repeat customers.  33% (5) were on recommendation from past clients.  1 was an old contact of Brian's and the remaining four were brand new calls.

I don't have a record of how many bids we've sent out.  I'll estimate about 10 that we didn't land the job.  Only one gets in my craw -I worked for several weeks figuring it out, was verbally guaranteed the project once the client approved, was in constant contact with the agency producer -then she never called back.  The others, most didn't happen.  The others I never heard back from.

We'd like to be doing a bid per week.  Counting awards plus bids, that puts at about 50% of where we'd like to be.

Something to aim for.
Posted by roconnor at 8:21 AM

As always it was a pleasure doing business with you fellers : )