Simple Gifts - No Room At The Inn

For years this was the artwork on the ASIFA-East membership form. 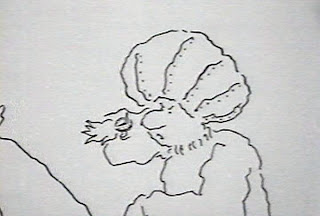 While I understand the urge to update after 30 years, I do feel the organization lost a little something going with a more generic "contemporary" design.

Again, the drawing is classic Ed Smith. Great expression.  But look at the posing.  It's not a stage-y silhouette.  The action is clear but the gesture isn't telegraphing it.  That happens in the animation.


Also, look at the line.  Similar illustrators will concentrate on the "squiggly" line.  The Blechman line isn't really squiggly.  It's broken.  It has no contour.  It's even a little misshapen.  The line starts and stops because every stroke is belabored.

These are qualities Ed captures without parallel.

In most films he'll animate every drawing himself -no inbetweener.  He'll generally draw directly in ink.  Almost always, actually.

I once asked him what he does when he's in the middle of drawing and makes a mistake.  His response, "I'll let you know when it happens."

Here's the piece in it's entirety.  It's a capture from an ancient VHS, so the quality is questionable.


It should also be noted with strong underscoring, that the music was composed by Arnold Black. He was a terrific guy who's delicate ear matched Ed Smith's touch on Blechman illustrations.
Posted by roconnor at 7:43 AM