I'd like to share some frame grabs of the Seymour Chwast's designs for "The Great Frost" excerpt of Virginia Woolf's "Orlando" which he created for R. O. Blechman's "Simple Gifts" in 1977. 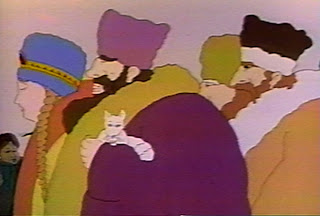 Blechman once told me that Al Brodax was referred to him while on the hunt for a designer for the Beatles' film "Yellow Submarine".

Bob was an "edgy" illustrator at the time, if not "edgy" -iconoclastic of a new style of visual art emerging in the 1960s. 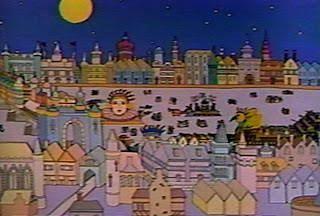 The meeting was spawned, in part, by an illustration he had done around a Beatles' song.  "She Loves Me Yeah Yeah Yeah," I think.  I'll have to dig around to find out.

In any event, Bob begged off the project, suggesting the producer meet with the Pushpin Group and Seymour Chwast -the undeniable giants of the new 1960s design. 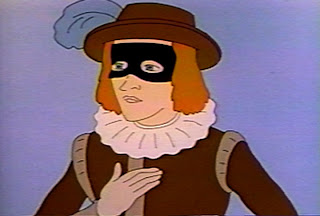 Heinz Edelmann was a singular talent and tremendous designer.  Had Broadax not been exposed to Pushpin during his New York talent hunt, he may not have had the vision to accept Edelmann's similar style.

Some say the Yellow Submarine aped Chwast and Glazer, that's not true and entire unfair to a great illustrator.

One thing is sure, the graphic styles are definitely kin. 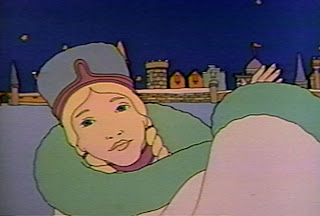 It's this style which Tissa David said gave her such a hard time.  The line is strict, which is difficult -you can see her loosening it here and as the film progresses the characters look more like hers and less like Chwast's.

Not just the line, though, these are flat characters.  They don't have volume.  This makes moving them in space (and retaining the design's integrity) particularly tricky. 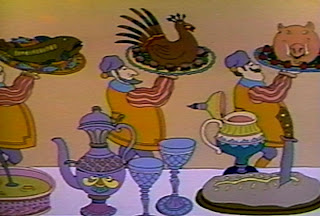 This film is limited animation.  So the sumptuousness of the design is important to carry much of the story. 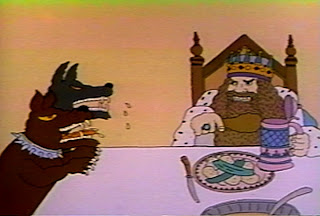 Before posting the entire film, I'm thinking of posting an interesting scene in which we see Orlando think.  Again, limited animation, but the drawings come together in a special way.

There's also some dancing which is worth taking note of.
Posted by roconnor at 6:18 AM

This film was something of a nightmare. I spent a lot of time honing in Tissa's drawings to match Seymour's. Then I had to closely watch the lines where colors would be painted.

Some of the brilliant work on this film was done by Janet Scagnelli who supervised the I&Pt at a nearby camera service. Seymour was putting upwards of 40 colors on a cel. Y1, Y2, Y4, Y3 all next to each other. I don't think you'll find it on the YouTube version.

Bob, of course, was oblivious of the problems, even when I tried to explain them. He just worried about not getting more footage.

Ha! I can imagine the problems.

I've seen the original cels, the detailing is absurd.

Even with all the issues -the animation tugs against the design, the budget fights the animation -it all pulls together, for me at least.

It seems such an outlandish idea for a film that it's a little brilliant.