Some of the acting is pretty bad. A lot of the dialogue flat and wooden. Sometimes the design and graphics border on grotesque.  But sometimes the design and graphics are sublimely beautiful and despite the sometimes weak moments of copy the script is structurally solid and incorporates enough not-too-bizarre outlandishness (like a swaggering Kinky Friedman as President) buoy any occasional banal banter.  The music is also first rate and perfectly balanced with the picture. 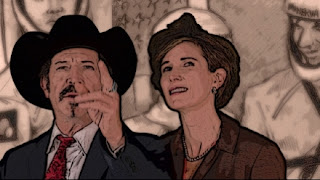 It will be playing at the ReRun Theater in DUMBO until Thursday.  The room itself is comparable to the film.  You step and think -oh, this is just some shitty room in the back of a bar -but it transforms into a warm, friendly place (a bit of Brecht with a full bar in the theater).  The projection is good -1080p and flawless screen -the seating comfortable, settling in quickly as a nice place.

Technique-wise it's a mix of animation with processed video.  The performers are chroma keyed and processed using a software the director wrote, the environments are animated and the mouths and eyes are essentially rotoscoped. 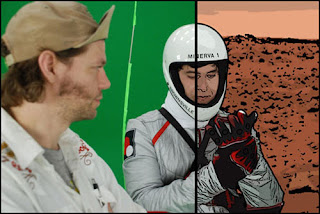 There's a deeper connection, too.  The Linklatter films a mature expressions of an alternative possibility for single frame filmmaking.  They're grand scale experiments in technique.

Where those films sometimes fall short is one of the great problems with animation -empathy.   Animation has a hard time connecting on a character to character level.  The technique is so effective with children, in part, because children have a greater capacity to personally connect with inanimate (though animated) objects.  The more live experience we get, the more we are compelled to find personal connection on screen. 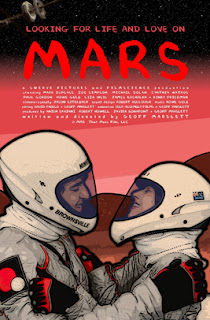 "Waking Life" concertedly pushes the viewer from this personal connection through it's episodic, non-linear narrative.  This intentional conceit -and the general novelty of the visuals -carried the picture without relying on the audience connecting with any of the faces on screen.

Lack of empathy was a real problem in "A Scanner Darkly".  I still feel this is amongst the most important animated films since "Snow White", but it still is saddled with that frame-by-frame verfremdungseffekt inherent in the technique.

The process in "Mars" thins the barrier between human and cartoon -so those layers of paint which cover the faces in "A Scanner Darkly" are more like rose colored glasses. 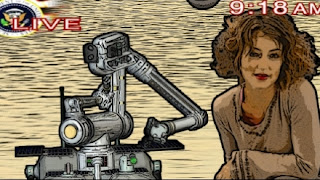 Like "A Scanner Darkly" -even moreso, and most importantly for filmmakers everywhere -this technique was the most efficient, cost effective way of telling this story in a compelling fashion.  By designing this world, the spaceships, the Martian landscapes, the robots and the real world all blended seamless with the characters.  In order to present that level of production with standard live action or full animation techniques would have required 100 times the production budget and maybe still fallen short of the results.


Why make a film in this manner?  It seems like there was no better to tell the story.

The quibbles I mentioned are minor nitpicks, most likely the results of production demands.  They're easily overlooked in such an enjoyable piece of work.

One thing does bother, though.  It's a love story, but we don't see the action of falling in love.  One of the reasons I find Brent Green's "Gravity Was Everywhere Back Then" so touching is that it shows the moments that made the two characters connect and the central theme of the film flowed from the results of those moments.  Here we're shown episodes of starbound lovers gradually moving closer together but never that time in between when we would see why they bonded.  Those episodes are nicely handled and compelling in themselves, that's why it would have been interesting to have been party to the mechanism and not simply the results.

Love stories all come back to "Romeo and Juliet".  Romeo and Juliet's families were killing one another, that's what was keeping them apart.  Pretty serious.  Too often we see romances on film where there are no real barriers to the couple getting together.   There were some barriers to be overcome in this relationship and I think the film would have benefited from exploring those a bit more. 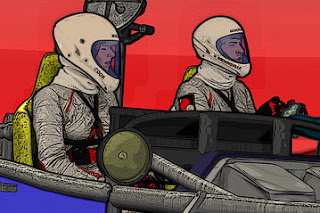 Like Bill Plympton's features, Nina Paley's "Sita Sings the Blues", even Paul Fierlinger's long form work the mere existence of "Mars" is a feat for the process of animation.  Like those artists' work, this may not have the seemingly universal appeal of "Toy Story 3" or "Tangled" but it has the personal touch of an individual thinker.  It has something to tell us, anyone who cares about film, animation, art or just being human should make every effort to drop the $5 and find out what.
Posted by roconnor at 1:44 AM

It's unlikely I'll get around to seeing Mars anytime soon, but I sure did like the spirit of this report.

You are a fan of Waking Life, yes?
I tried to watch it once and lasted maybe seven minutes.

This picture isn't really anything like "Waking Life". This similarities are superficial, they're two very different kinds of films.

I appreciate "Waking Life" and think it's a great piece of work, but it's not a particularly "likable" film. I think Linklatter's style of movie making relies on audience/character empathy. That's the hardest thing to do (with any sophistication) in animation.

There are amazing moments which carry "Waking Life" and some passages are just visually astounding, but it falls short of something like "Slacker" because it's missing that vital piece.

It's a very important film, "Waking Life", moreso than just about any other feature animation of our era.

"Mars" has that missing connection. Likely because the human figures aren't really animation.

I'll also add that I love "A Scanner Darkly", which is closer to "Mars" but still very different. "Sin City" (another favorite) is the other cinematic reference the director used. Style-wise it's somewhere between those two

Important in what way, please?

Waking Life, it represents a wholly new direction for animation and was made by people who weren't animators.

The film has nothing to do with any of the cartoon conventions that have been established and repeated.

It terms of a long form work of film, there was nothing like it that preceded it.

The closest would be some shorts like Paul Vester's "Abductees".

Taking "good" or "bad" out of the equation, "Waking Life" was completely novel. It shows that an individual artist can achieve mass success using animation without years of subjugation to the studio system. This is not to take anything away from Bill Plympton who has been doing the same thing -but "Waking Life" is a much bigger milestone than "I Married A Strange Person" or "Mutant Aliens" (which premiered the same year as "Waking Life".