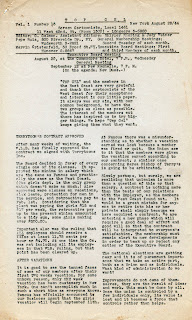 "Top Cel" and the members in the East Coast are very grateful and thank the cartoonists of the West Coast for their acceptance and interest in our little paper.  It always was our aim, with our common background, to have the two groups as close as possible.  The interest of the members out there has inspired us to try bigger things.  We hope "Top Cel" keeps giving them what they want.

After many weeks of waiting, the WLB has finally approved the contract we signed with Terrytoons Inc.

The Board decided in favor of every single one of its clauses.  It approved the minima in salary which are the same as the West Coast.  (The girls dept. is the only group which doesn't make as much.)  Also approved were clauses on vacations, sick leave, protection for men in the service, and retroactive pay to Feb. 1st.  Considering that the plant was paying the girls $15 and $17 per week, the retroactive pay up to the present minima amounted to a tidy sum, some girls making over $300.00.

Important also was the ruling that ALL employees should receive a raise at least 11.75 cents per hour or $4.70.  At one time the Co. was not including all its employees in the WLB. ruling but that point has been cleared up.

It is good to see the tanned faces of some of our members after their first TWO weeks vacation.  For some unknown reason, only ONE week vacation has been customary in New York.  One can't accomplish much in such a short time as everyone knows.  Famous has officially announced to our Business Agent that the girls vacation begin September 11th.

At Famous there was a misunderstanding as to whether a vacation earned was lost because a member was fired or quit.  The Union saw to it that the members were given the vacation earned according to our contract.  A similar case concerning Marea Bishop of Terry's is going to be arbitrated.

Slowly perhaps, but surely, we are realizing that unionism is more than a question of this or that salary.  A contract is nothing more than the basis of our relations with the Employer, as the members of the West Coast found out.  It would be a great mistake for anyone to retire into his or her private shell simply because we have acquired a contract.  We are entering a new phase which will require a good deal of effort and good will so that the contract will be interpreted to everyone's satisfaction.  The membership must remain alert to new developments in order to back up or reject any action of the Executive Board.

The national elections are getting near and it is of paramount importance that we take an active part, both as a Union and as individuals.  What kind of administration do we want?

Improvements don not come of themselves, they are the result of ideas and work.  This must be done by all.  Once the union is controlled by a few individuals only, its value is lost and it becomes a force that controls rather than helps. 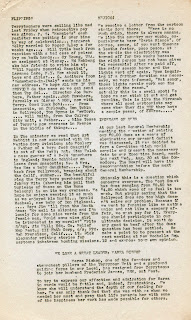 Terrytooners were smiling like mad last Friday when retroactive pay was given.  P. S. "Margie's" cash register was putting in over time by way of celebration... Margaret Selby married to Roger Daley a few weeks ago.... BILL TYTLA back from vacation with a bad case of poison of on both hands... Cy Young, USA. on assignment at Disney.. Ed Rehberg asks his friends to write him at: "Will Rogers Memorial Hospital", Laranac Lake, NY.  How about it, boys and girls?... C. Auditore from "Somewhere-in-Italy" sends us his new address.  We hope all men in the service do the same so we can send them Top Cel... Director JOE BARBERA, Father again... BOB KUWAHARA, formerly at Disney & MGM now with Terry. Good luck Bob!.... From Anacostia, on furlough, Don Tobin in Hollywood, Tom Byrne in New York. ... Bill Smith from the Culver City unit, a Father.... Mike Tessa of Terry's now overseas in France in the middle of things....

In The Animator we read the ART BABBITT is now connected with US Marine Corp Aviation; ADE WOOLERY a Father of a boy; JACK COSGRIFF is out of the Navy; Sgt. STAN WALSH a nose gunner of a B-24 somewhere in England; BERNIE SCHIBLER on leave from Anacostia; Mr. & Mrs. TEE HEE a baby daughter.... Pepe, back from Hollywood, bragging about the California summer... The beautiful ring the Terry boys purchased for JOHNNY VITA (showing him pull that burlesque of Mussolini on the Rome balcony) is on its way overseas.  we hope he enjoys wearing it as much as we enjoyed his hunt!... Donald Michael, new baby of Don Figlozzi..... Say Jim Will from South Seas: "My mail is slipping and I'm lonely for some nice words from the female sex.  Would some nice girl be interested in my morale?"  Write S/Sgt. Jim Will: Hdq. Co. Relief Map Sect.; III Phib Corp, c/o FPO San Francisco CA.... Lt. DICK ALEXANDER writing stories for cartoons inbetween bombing missions.

We receive a letter from the cartoon studio down there: "Here is no rush amigo, there is always manana.  We like the country muy mucho, especialmente beer "Carta Blanca".  Of course, senor, if you want theengs a leetle faster, poco pesos.  at the studio the electricity was turned off for two weeks because the right person had not been given "el necesario."  After we paid off, the rainy season began and the lights went off again.  Upon inquiring if a further donation was necessary, we were informed, "But senor, thees lights nevair work een the season of the raoon."

Actually this is a swell spot!  We hope we can stick it out and get results.  This is like the Nirvanah where all good cartoonist may come when the die: EEF  they have a couple pesos, of course......"

At our last General Membership meeting the question of raising our $2.00 dues as a means of eliminating our present deficit was discussed.  It was decided to from a Committee which would compile and present the necessary data to our Executive Board, meeting next Wed.  Aug 30 at the Commodore.  The Board will have its recommendation before the next General Membership.

Obviously, this is a question which concerns everyone.  The West Coast has dues ranging from $2.50 to $4.50 which  some feel is too much.  But simply saying that the Hollywood dues are too high doesn't solve our problem.  Because if we want to function like an active union and not like a company affair, we must pay for it.  Everyone should participate in our ultimate decision.  It won't do any good to beef after the dues question has been settled.  So make a point to be present at the next meeting at New Rochelle.  Sept 12 and express you own opinion.

WE LOSE A GREAT LEADER: MAREA BISHOP
Marea Bishop,  one of the founders and staunchest pillars of the Terrytoon Unit and a profound guiding force in our Local, has resigned from Terrytoons to join her husband Frederick Jaques, USN, out West.
To try to express our affection and admiration for Marea in word would be futile and, indeed, frustrating.  We know she will understand the depth of our feeling for her.  We can only thank God that she was with us when we needed her most and pray that Life rewards her with some of the happiness her work has made possible for others. 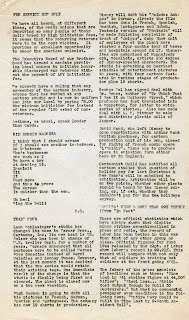 FOR SERVICE MEN ONLY

We have all heard, at different times, of the nasty unions that are depriving so many people of their daily bread by high initiation fees.  It seems that the returning veterans were to be the next victims.  It provides an excellent opportunity to smear the American unionist.

The Executive Board of our brotherhood has issued a mandate permitting local unions to initiate honorable discharged war veterans without the payment of ANY initiation fee.

We already have a ruling that any ex-member of the cartoon industry, anyone that has worked at any cartoon studio and is now in uniform can join our Local by paying $5.00 the minimum initiation fee instead of the regular $100 asked of non-veterans.

I think that I should scream
If I should see another in-between
An inbetween
Who's beckoneen
One such as I
To have a try
At drawing it.
Inanimit
Yit
It
Must move
And thus to prove
The screen
Is quicker then the een.

Leon Schlesinger's studio has changes its name to Warner Bros., Cartoons, Inc.  Its new head is Ed Selzer who has been in charge of WB trailer department for a number of years.  Warners announced that all cartoons were to be called Warner Bros Comedies instead of Merry Melodies and Looney Tunes.  However, at the last moment it was decided that the two series would retain their existing tags.  One immediate result of the change is that hte studio is finally being fixed and cleaned.  The plant is closed now on a two week vacation.

Hugh Harman is going to dub all his pictures in French, German, Spanish and Portugese.  The company now has 19 shorts in production.

Disney will dub his "Saludos Amigos" in German.  Already the film has been done in French, Spanish, Swedish, Portugese and Dutch.  Teutonic version of "Fantasia" will be made following the completion of track of "Amigos".  Camp Show unit of employees at the pant have started a four months tour of bases and hospitals around California.  Disneyites are comprised of Huggajeedork, vocalists, artists and voices of Disney-created characters.  The studio is embarking on heaviest schedule of entertainment pictures in years, with four cartoon features in various stages of production plus 18 shorts.

George Pal has signed deal with Dr. Seuss, author of "To Think Tank I Saw It On Mulberry Street", which producer has just translated into a Puppetoon, for latter to write a series of stories.  Also has made a deal with A. H. Bittner to make and distribute plastic dolls of Jasper.

David Hand, who left Disney to open negotiations with Arthur Rank British producer, for cartoon production unit of his own, close for rights of French comic opera "L'Eclair".  Plans are to produce opera in animation form either here or in England.

Cartoonist Guild has notified all cartoon studios that question of holiday pay for last Christmas & New Year's will be submitted to arbitration.  Arbitration will be on two points, whether other plants should be bound by the Disney ruling, or, if not, whether they shouldn't pay for the two holidays anyway.

WORKERS' RECORD MORE THAN 99% PERFECT (from "In Fact")

There are official statistics which have always shown that despite minor strikes sensationalize in press and radio, the record of labor has been better in this war than that of any other group or class.  Official figures for June 1944 release by the Dept. of Labor show labor's record is 99.91%.  This record will compare with not only that of soldiers in training but soldiers at the front going AWOL.

The fakery of the press consists of headlines such as these: "Time Lost in '41 strikes Figure at 44,000 Rifles"; "Steel Loss... Strike Cost Output Enough to Build 30 Destroyers."  But what no commercial newspaper ever headlines is the following news: "Entire Navy Could Be Built in Time Lost by 9-Month Accident Toll".
Posted by roconnor at 7:00 AM