Here's a scene which must have been a real nightmare. But Tissa David excels at two things like almost no other animator -1) elaborate dances 2) making limited animation look like its on ones. 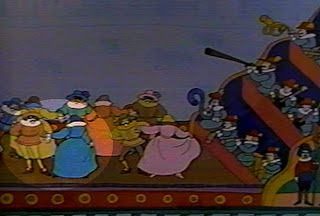 E01
I've pulled what look to be the extreme drawings in this scene. 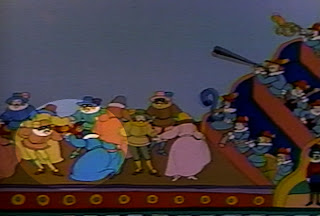 E02
Traditional dancing like this is easy to go pose to pose and still look natural -after all, dancing is about putting your arms and legs in the right place at the right time.

In a few recent dance pieces we've done, we even go so far to key positions off of reference footage and inbetween from those.

There are eights sets of dancers (plus the star couple) in addition to the musicians.  One couple here is highlighted, the other seven are basically the same. 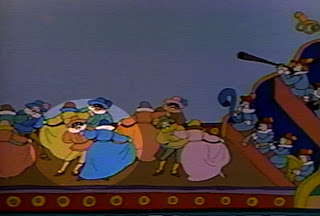 E04
Although these are extreme positions, they still have a lightness -the kind of thing you often find in straight ahead animation.  The positions aren't hit "hard", they're intrinsic points which the animation/dance moves through. 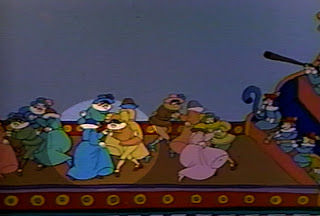 E05
This scene is silhouetted so that the men face camera.  Typically, a dance involves the man as a centerpoint for the action/motion of a woman.  Here, the men's lines are clearer, so the women's billowing skirts cover the foreground while the men's defined legs (and arms) showcase the motion. 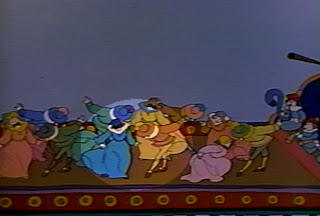 E06
This bow has a few drawings that go into this pose and one more still after this position leading out. 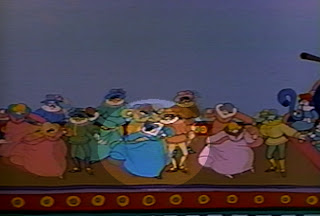 
Below is another dance sequence, this one just starring the main characters.

All of these dance scenes were on long pan cels and created their share of problems with all the colors. It was quite a job. The real hero of the coloring world, as I mentioned before, was Janet Scagnelli. Of course, Tissa's animation was brilliant and brilliantly planned. The only references for her dances come out of her head and hand.