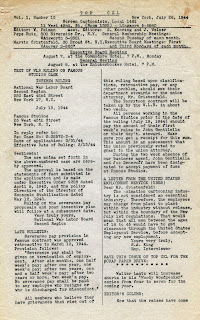 TEXT OF WLB RULING ON FAMOUS STUDIOS CASE
INTERIM RULING
National War Labor Board
Second Region
220 East 42nd Street
New York 17, NY
July 19, 1944
Famous Studios
25 W. 45th Street
New York, NY
In reply refer to:
Re: Case No: 2-32572-D-4
Date of application: 3/31/44
Effective Date of Ruling: 3/13/44
Gentlemen:
The new mnima [sic... "minima" maybe, the Latinate plural for minimum] set forth in the above-number case are hereby approved.
The approval is based on the statements of fact submitted in the application and is made under Executive Order 9328 dated April 8, 1943, and the policy Directive of the Director of Economic Stabilization dated May 12, 1943.
Ruling on the severance pay proposals and your incentive plan will follow at a subsequent date.
Very truly yours,
National War Labor Board
Second Region
LATE BULLETIN:
Severance pay provision in Famous contract was approved retroactive to March 13. 1944.  Provision follows:

All members who believe they have grievances that rise out of this ruling based on classifications, retroactive pay, or any other problem, should see their department stewards or the union attorney, Mr. Cristenfeld.

The Terrytoon contract will be taken up by the WLB in about two weeks.

All persons working in the Famous Studios prior to the date of the ruling (July 19, 1944) should pay the amount of their first week's raise to John Gentilella and Joe Deneroff have been designated to accept payment of dues at Famous Studios.

A LETTER FROM THE UNITED STATES EMPLOYMENT SERVICE (USES)

The animation cartooning industry is not considered an essential industry.  Therefore the employees may change from plant to plant within the industry without release, but within the boundary of the New July 1st regulations.  That would mean that all men between the ages of 18 and 45 would have to get clearance through the United States Employment Services before accepting any new employment.

SAVE THIS ISSUE OF TOP CEL FOR THE SCRAP PAPER DRIVE!

************
Walter Lantz will increase shorts in his "Woody Woodpecker" series from four to seven for the coming year.
EDITOR'S COLUMN:
Now that the raises have come 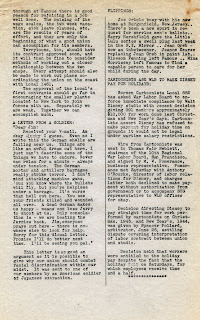 through at Famous there is good reason for rejoicing in a job well done.  The raising of the wage scales, the two week vacation, sick leave clauses, etc.  are the results of years of effort, and they are only the beginning of what a good union can accomplish for its members.
Terrytoons, too, should have its contract approved soon, and it will then be fine to consider methods of working out a closer relationship between the two shops.  Every attempt should also be made to work out plans coordinating the union on the coast with local 1461.
The approval of the local's first contracts should go far in encouraging the smaller plants located in New York to join forces with us.  Together we can accomplish much.
A LETTER FROM A SOLDIER:
"Dear Jim:
Received your V-mail.  Am okay -lucky I guess.  Even as I write this the German shells are falling near us.  Things are like an awful dream out here.  I just can't describe some of the things we have to endure.  Never can relax for a minute -always under tension.  The German mortar and artillery barrages really strike terror.  I don't mind attacking machine guns, cuz you know where the bullets will fly, but you're helpless under a barrage.  It's worse than hell out here.  You see your friends killed and wounded all over.  A dead German makes us happy -means one less Jerry to shoot at us.  Only consolation is -we are beating the Jerries back.  Jim, everyone prays out here -there is nowhere else to look for help.  Sorry for this dismal letter.  Promise I'll do better next time.  I'll be seeing you pal."
This letter is as good an argument as it is possible to give why our union should combat racial discrimination within our midst.  It was sent by an American soldier of Japanese extraction.
FLIPPINGS
Joe Oriolo busy with his new home at Bergenfield, New Jersey...  There's been a new spurt in requests for service men's ballots... Harry Hershfield gave the Little Lulu series a swell plug last week in the NY Mirror... Jean Greb -now an inbetweener.  Jeanne Kearse replacing Jean Greb in paint lab.. Blossom Fanning left Famous.. Mina Morrissey left Famous to find a capable person to care for her child during the day.
CARTOONISTS ASK WLB TO MAKE DISNEY PAY FOR HOLIDAYS:
Screen Cartoonists Local 852 has asked War Labor Board to enforce immediate compliance by Walt Disney studio with recent decision giving 391 members approximately $10,000 for work done last Christmas and New Year's days.  Cartoonists assert Disney has refused to make payment for holiday time on grounds it would not be legal under wartime salary restrictions.
Wire from Cartoonists was sent to Thomas Fair Neblett, chairman of the 10th Regional War Labor Board, San Francisco, and signed by MW Pomerance, business representative.  Pomerance met Saturday with Anthony O'Rourke, director of labor relations for Disney, and charges latter both declined to make payments without authorization from government or to accompany SCG representative to WLB offices for okay.
Decision directing Disney to pay straight time for work performed by cartoonists on Christmas, 1943, and New Years, 1944, was given by Spencer Pollard, arbitrator, June 26, settling dispute covering interpretation of labor contract between union and studio.
Decision held that workers were entitled to the holiday pay despite the fact that the holiday fell on Saturdays, for which employees receive time and a half.
Posted by roconnor at 6:30 AM