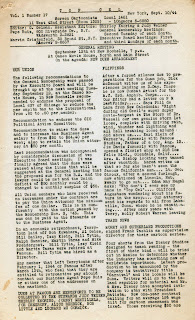 The following recommendations to the General Membership were passed by the Executive Board and will be brought up at the next meeting Tuesday September 12, at the Cameo Movie House, in New Rochelle recommended to the proposal of the Local 637 of Chicago  to reduce the per capita tax to the International from .80 to .60 per member.

Recommendation to raise the dues and to increase the Business Agent salary from $50 to $64.40 per week; also to retain the Union attorney at $50 per month.

Last recommendation was accompanied by considerable discussion of two Executive Board meetings.  It was finally agreed that the dues were raised along the lines that will be suggested at the General Meeting that the proposed sum for the B. A. and the lawyer could be met and the Union deficit of $50 monthly could be changed to a month surplus of $50.

All Union members who have received no increases under the contract are to pay the Union attorney the minimum fee of one dollar.  this is in conformity with the motion passed by the membership Nov 3, '43.  this sum can be paid to the Stewards or to the Business Agent.

Any member that left Terrytoons after February 1, 1944 or Famous after March 13, who feel that they are entitled to retroactive pay should contact our Business Agent Pepe Ruiz or either one of the addresses on the masthead.

After a forced silence due to preparations for the Guam job, Dick McDemort writes us of his experiences landing on D-Day.  There he is now Combat Artist for the MC 3rd. Amphibious Corps...  Our Editor had a letter on PM last Friday...  Says Phil deLara from New Caledonia: "Right during old Cecil's super duper movie-tempest in The Story of Dr. Wassell our own genuine storm let loose, completer with driving rain, wind, thunder and lightning and all hell breaking loose around and above us... Earl Klein of Warner's, formerly with Famous Studios, Father of a boy, Aug 13...  Jim Davis formerly with Famous, opened a florist shop at 218 Los Feliz Blvd., Glendale, CA....  Mrs. M. Bishop looking very tanned after vacation.  Marea writes us that so far she hasn't seen the famous California sun... Lt. Geo. Giroux, after a second furlough, now stationed in Lincoln, NE ready to go out... Edna May Regal asks:  "Why don't I ever see my name in 'Top Cel'... Clifford Augustson wondering about his future in the Army....  Our attorney send his regards to all from Lakeville, CT where he is vacationing... After many years with Terry, Molly Robert Warren leaving.

Four shorts from Disney Studios designed to teach reading -the first of their kind -will be tried out in Mexico to determine whether the industry has something new of worldwide importance.  Latest production to be announced by the company is tentatively titled "Carnival" and its locale will be Cuba.  Writers will go to the island republic for material and Mr. and Mrs. Disney have accepted invitation to stay with President Batista.  New one-year contract calling for an average 15% wage tilt for cartoon cameramen was inked.  Those receiving $50 are raised to $60, those receiving $65 to $75, those getting $75 to $85 and those being paid $85 are moved up to $96.40.  The Cartoonist Local in Hollywood has to the CA State Labor Commissioner to collect approximately $10,000 in wages.  The studio failed to pay some 400 men for last New Year's and Christmas, although an arbitration decision ordering the payment has been approved by the War Labor Board. 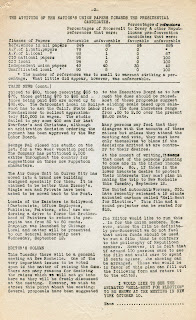 George Pal closed his studio on the 1st for a two week vacation period.  The Company has petitioned 2500 exhibs throughout the country for suggestions on three new Puppetoon characters.

The Air Corp Unit in Culver City has moved into a brand new building designed specially for them.  It is claimed to be better than Disney's.  Single men and Private have been asked to be moved back to the Post.

Locals of the Painters in Hollywood (Cartoonists, Office Employees, Publicists, Painters, etc.) are endorsing a drive to force the Brotherhood of Painters to reduce its per capita tax from 80 to 60 cents.  Campaign was launched by Chicago Local and matter will be presented to our General Membership next Wednesday, September 12.

This Tuesday there will be a general meeting at New Rochelle.  One of the very important issues to be voted upon is the matter of raising the dues.  There are many reasons for desiring the raises which we will not go into here as they will be freely discussed at the meeting.  However, we wish to stress this point about the meeting: Several proposals have been suggested to the Executive Board as to how much the dues should be raised.  Most of the these proposals suggest a sliding scale based upon salaries.  The dues increases range from .50 to 2.50 over the present $2.00 rate.

Many persons feel that they disagree with the amounts of these raises but unless they attend the meeting and vote, they must have only themselves to blame if the decisions arrived at are contrary to their desires.

At the moment of writing, it seems that most of the persons planning to come are in the higher income brackets.  So, if those in the lower brackets desire to protect their interests they mut plan in making the trip to New Rochelle this Tuesday, September 12.

The United Automobile Workers, CIO have recently released a 15 minute animated cartoon called "Hell-Bent for Election".  This film and a sound projector can be rented for $15.

The Editor would like to run this film for the union members.  However, since the film is definitely pro-Roosevelt we do not feel that union funds should be used to run a film that is contrary to the philosophy of Republican members.  However, it is felt that if around 100 persons care to see the film and would care spend 15 cents apiece, the showing can be arranged.  Those who would be in favor of this plan can fill out the following form and return it to the editor.

I WOULD LIKE TO SEE THE ANIMATED 'HELL-BENT FOR ELECTION' TO BE SHOWN AT THE MEETING IN NEW YORK OCTOBER 10.
Posted by roconnor at 5:11 AM

My film collector friend Mike Olshan has a 16mm print of "Hell Bent for Election" Produced by Chuck Jones. http://www.youtube.com/watch?v=xhykCuN_BpY