We've been making a little film on Thomas Eakins' "John Biglin in A Single Scull".

In addition to being known as the best draughtsman of his day, Eakins was meticulous in his preparation. 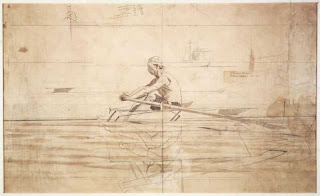 He figured out all his perspectives on paper.

And then did a study: 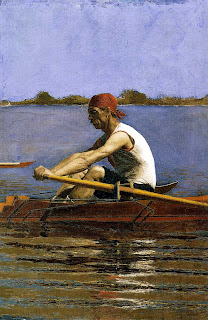 in oil, to prepare for the "final" watercolor.

This is part of his rowing series.   It marks his first major body of work.  Most of the series are oils, but he crafted  "John Biglin in a Single Scull" as one of his few watercolors.

This is the original which is in collection at Yale: 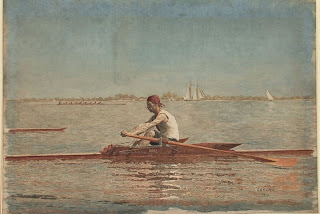 He was so proud of the work that he sent to his teacher, Gerome, in Paris and made a copy for himself.

Below is the copy which is in the Metropolitan Museum's collection. 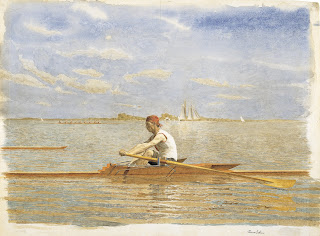 These pieces are "works on paper" and can not be restored.  As such, they rarely if ever go on public display.  You can see the discoloration (in the original especially, since that's a high resolution photo we took) by look at the edges where the pieces were once framed.
Posted by roconnor at 6:03 AM