Issue number 68 answers the question "how were these newsletters produced?"

Answer: "Collapsing under the strain the mimeograph machine exploded.  It was not till week that working order was established.  Excelsior!" 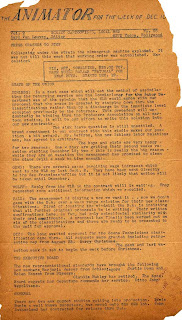 State of the Union

Schlesinger: In a test case which will set the method of assimilating the returning service men the Commissioner for the Labor Department was of the opinion that the WLB would agree withour proposal that the space be created by stepping down thru the classifications rather than by a discharge in the immediate level occupied previously by the returnee.  This precedent will undoubtedly be binding thru the Producers Association on all cartoon studios, it will be our effort to write this solution into our new contracts.

The sick leave question is still unsettled.  A broad commitment in our contract with this studio makes our position a bit awkward.  Mr. Heffron, the new Schless labor relations man, has agreed to arbitrate.

The boys and girls war very happy -for two reasons.  One -they are getting their second weeks vacation starting December 19; two -this is really the big reason -while they are on vacation the management has promised to clean the place (will a week be time enough).

GEMS: There are several cases involving wage increases which went to the WLB on last Sept. 8.  They have been sent directly to the San Francisco office but it is not likely that action will be taken until December.

WOLFF: Reply from the WLB on the contract is still waiting.  They requested some additional information which we supplied.

PALS: The management is playing a now we want it... now we don't game with the Business Agent over a wage range solution for their new classifications.  Tired of jousting the windmill the BA is insisting that all further original proposals be in writing.  Their written confirmations have, so far, had only coincidental similarity with their oral commitments.  A proposal has finally been worked out on six of the classifications and three are ready to be presented to the unit for approval.

DIZ: The long awaited approval for the Scene Technicians classification came through.  All requests were granted including retroactive pay from August 23.  Merry Christmas.

The next and last vacation is set to begin the week before Christmas.

There are two new puppet studios getting into production.  Lewis Bunin a well known puppeteer, has moved onto the MGM lot. John Sutherland has contracted for release through United Artists. 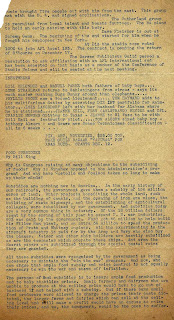 Bunin brought five people out with him from the east...

The Sutherland group is recruited from local talent and boast fourteen...

Dave Fleischer is out at Screen Gems.  The beginning of the end started for him when he fought his employees in New York.

Bill Melendez and Manuel Parez both fathers of baby boys...

This issue ends with a piece on food subsidies by Bill King.
Posted by roconnor at 6:31 AM