A Collection of Brilliant Shorts

This is from a 1973 Janus Films catalog, a short film collection they were promoting for rental. 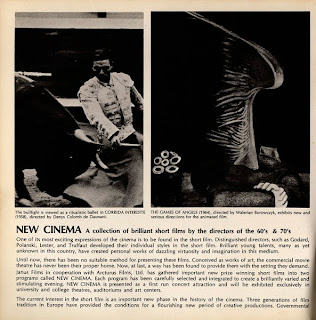 The animation program rented for a minimum of $200 or 50% of gross receipts whichever was greater.

No wonder it became impossible run an independent cinema -rental costs alone would do you in. 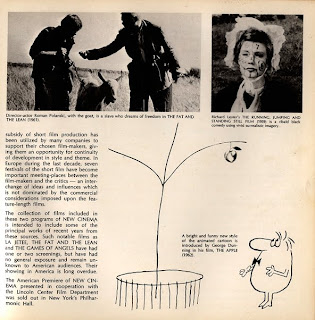 I once had lunch at The Ink Tank with Ben Barenholtz, legendary indie distributor and father of the midnight movie (he also is responsible for playing Suzan Pitt's "Asparagus" in front of David Lynch's "Eraserhead" in what might be the greatest ever combination of short and feature).

He told us how he would buy a ticket to his films' screenings and count heads so that when a theater manager said "10 people showed up" he could say, "I counted 20." 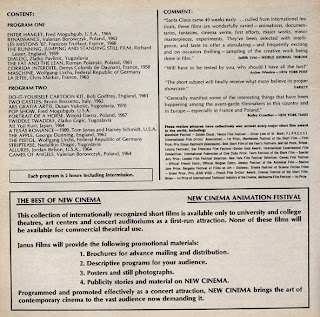 Here (above) are the programs.

Program one begins with Fred Mogubgub's "Enter Hamlet" and tours through Truffaut, Polanski and Richard Lester before ending with an all time great "La Jetee".

Program two is the animation program.  Here's what it lists: