The Cab Calloway documentary which we did graphics for and was edited at our place just got a four page spread in the June issue of the French Jazz Magazine. 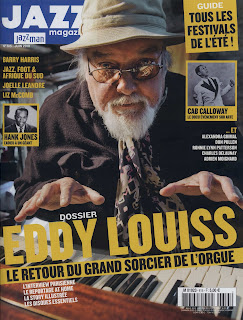 The sequence of Steve Brodner drawing (which we then animated) was one segment of the film that was featured. 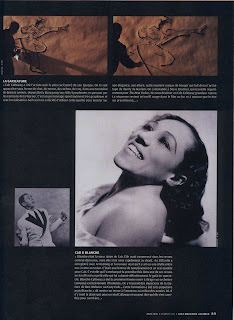 Here's the rudimentary gist of the caption: Cab Calloway was a black artist who embodied his era. His moves could resemble a cat and all sorts of other animals, he appeared in cartoons with Betty Boop and Silly Symphonies at Warners. His personality was cartoonish and energetic. Director Gail Levin brings out the elegance, allure, and unique manner of the archetypical dandy of Harlem. She brought in Steve Brodner, who works regularly with the New Yorker, to paint Cab in a grand style. The sequence is cut throughout the film as the figure get drawn.

I could have gotten that completely wrong. They don't seem to mention that the drawing of Cab pulls himself off the wall and dances with a real live guy at the end.

Maybe they didn't that far.
Posted by roconnor at 5:26 AM